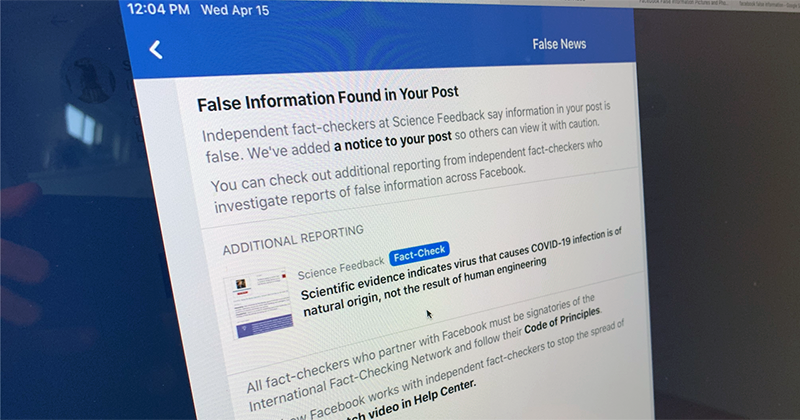 Facebook has announced that it will begin issuing warnings to users who have clicked on or liked what it deems to be ‘misinformation’ about the coronavirus. The social network will also direct those users to a site where the World Health Organization “lists and debunks virus myths and rumors”, according to the AP.

the report states that “The new notice will be sent to users who have clicked on, reacted to, or commented on posts featuring harmful or false claims about COVID-19 after they have been removed by moderators.”

Facebook is to promote a WHO backed site called “Get The Facts,” where “conspiracy theories” about coronavirus are debunked.

Facebook CEO Mark Zuckerberg wrote on his Facebook page Thursday, “Through this crisis, one of my top priorities is making sure that you see accurate and authoritative information across all of our apps.”

The AP report notes that so called ‘fact checkers’ and moderators at Facebook are “up against people’s mistrust of authoritative sources for information, such as the WHO.”

It is hardly surprising that people do not trust the WHO.

For weeks, the organisation parroted the patently false claims of the communist Chinese government regarding the spread of the virus.

Internal Chinese government documents obtained by the Associated Press this week prove that China knew for sure in mid January that the outbreak of coronavirus was a likely pandemic and was highly contagious between humans, yet simultaneously announced, with the backing of the WHO, that there was no “evidence of human-to-human transmission.”

Facebook now faces an even bigger problem with getting users to trust it given that one of its key ‘fact checkers’ was revealed to have worked at the Wuhan Institute of Virology (WIV), and has since been placed in charge of debunking articles suggesting that COVID-19 may have leaked from the bio-lab.

This clearly represents a giant conflict of interest, as Zero Hedge reports:

Danielle Anderson, who works at Duke University’s NUS Medical School lab in Singapore, also contributes to Science Feedback – which Facebook has been using to slap “False Information” labels on articles claiming that COVID-19 may have originated at the Wuhan institute – where Anderson worked with bat coronavirus.

A quick search of Anderson’s publications reveals no fewer than nine collaborations with Dr. Peng Zhou – a Wuhan scientist experimenting on bat coronavirus (the mention of whom may result in a Twitter ban).

If you follow the info, you will find the Facebook fake fact-checker on the China Wuhan lab is a scientist who works/worked at China's Wuhan lab the past two years and says it is impossible that they would be sloppy because they are very careful! 😂😡@Facebook https://t.co/Ldvu7He82v

Some of Anderson’s handy work on Facebook can be seen below:

You couldn’t make this up. Facebook is banning ‘misinformation’ about the virus, as determined by someone who worked in the Wuhan bio-lab.