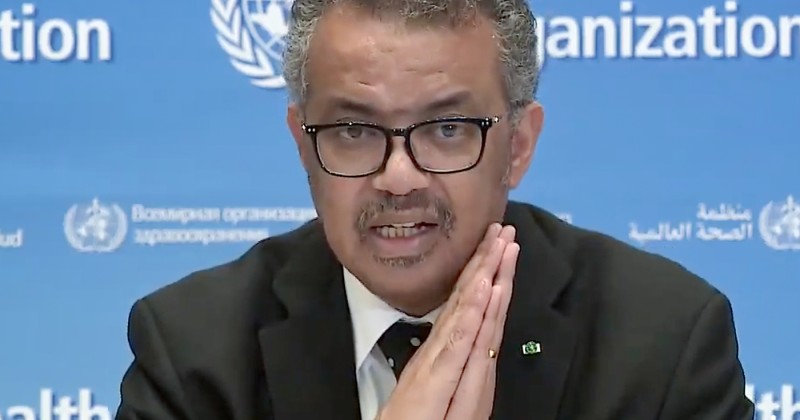 The Director-General of the World Health Organization is a former member of a violent revolutionary communist party in Ethiopia that denied emergency medical treatment to an ethnic group and he is accused of personally overseeing the extradition of dissidents who were later imprisoned and tortured.

As we have previously highlighted, Tedros Adhanom Ghebreyesus has repeatedly parroted Chinese Communist Party talking points, constantly heaping praise on Beijing’s response to coronavirus despite the fact that China hid the truth about its spread and viciously silenced scientists and doctors who tried to warn the world.

Now we know why.

As John Martin explains in his excellent piece ‘The Crimes of Tedros Adhanom’, during his time in Ethiopia, the WHO chief was a member of the Tigray People’s Liberation Front (TPLF), a violent communist revolutionary party which was listed as a terrorist organization by the U.S. government in the 90’s.

According to one Ethiopian newspaper, Adhanom was listed as the 3rd most important member of the politbureau standing committee in the TPLF.

Martin writes how the TPLF engaged in “systematic discrimination and human rights abuses” by refusing emergency healthcare to the Amhara ethnic group because of their affiliation with the opposition party. The Ministry of Health that oversaw these abuses was led at the time by Tedros Adhanom Ghebreyesus.

Birth rates were recorded to be significantly lower in the Amhara region compared to other regions and 2 million Amhara people “disappeared” from the subsequent population census.

As Tucker Carlson highlighted earlier this week, Adhanom “got his job with Chinese support after he covered up cholera outbreaks in his home country” of Egypt.

Tedros has denied the allegation, which centered around claims he had downplayed cholera epidemics in Ethiopia in 2006, 2009 and 2011 by passing them off as “acute watery diarrhea,” a symptom of cholera.

“International organisations were pressured not to call it Cholera (despite the UN testing the infected and finding Cholera), and were pressured by government employees not to reveal the number of infected. Another stunning victory for the health minister,” writes Martin.

After he was appointed foreign minister of Ethiopia in 2012, dissidents and journalists across the country were subjected to a brutal government crackdown, leading some to flee to exile in nearby Yemen.

Adhanom was personally responsible for negotiating the extradition of these dissidents back to Ethiopia, some of whom were subsequently imprisoned and tortured.

“One such case was a British citizen Andy Tsege who was arrested at Sana’a airport and twice given a death sentence in Ethiopia,” writes Martin. “This led to the involvement of the British government who threatened denial of aid to Ethiopia unless he be granted asylum. Tedros responded that Tsege was “being treated very well. He even has a laptop, have you ever heard of a political prisoner with a laptop?” Andy of course, after his return to the UK told a somewhat different story of being tortured for days on end, alongside dozens of other prisoners.”

Dissidents being imprisoned and tortured? No wonder Adhanom is so effusive in his praise for China.

In 2016, the Ethiopian government attempted to force relocate 15000 people in the Oromia region because it wanted to requisition their land. This led to mass protests followed by mass shootings and a stampede that killed 500 people according to Human Rights Watch. The government then embarked on another brutal crackdown, arresting 70,000 people.

Adhanom subsequently tried to downplay the violence, falsely claiming the police weren’t armed and that the numbers weren’t as high as stated.

After ascending to his lofty position within the World Health Organization, Adhanom appointed mass murdering dictator Robert Mugabe to be a “goodwill ambassador” to the WHO while also defending Uhuru Kenyatta, under whose government 1,300 people were killed following rigged elections.

“Tedros of course takes every chance he can to praise the good governance of China, and given the human rights record of the People’s Republic, it’s no wonder he likes them so much,” writes Martin. “From projects like media propaganda centres, mass relocations, and social credit style score cards, Ethiopia’s governance in many ways resembles a carbon copy of the Chinese authoritarian model. Complete with a one party state and focus on profit over human rights.”

In the immediate aftermath of the coronavirus outbreak, the World Health Organization, under Adhanom’s direction, amplified Chinese fake news that there was no “human to human” transmission of COVID-19 as late as January 14th, despite this having already occurred in December.

The WHO and Adhanom also repeatedly demanded countries not impose border controls, exacerbating the spread of the disease, while appearing to be more concerned about political correctness and the “stigmatization” of Chinese people.

“In a sane world, instead of leading a global organisation, Tedros and his cronies would be put on trial at the International Criminal Court, tried for his crimes, and if found guilty, should spend the rest of his life in prison,” concludes Martin.