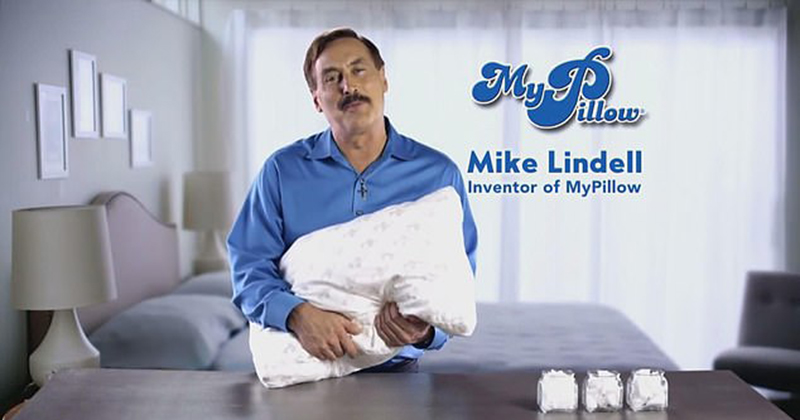 A load of leftists screeched into the ether Monday night after Mike Lindell, CEO of My Pillow, who has pledged to use his factories to make 50,000 N95 masks every day for healthcare workers, was given a platform by President Trump, which he used to praise God.

My Pillow announced last week that it was shifting 75 percent of its production capacity to making the medical masks. It joined other companies such as Ford, United Technologies Corporation, Honeywell, and Proctor and Gamble in joining the cause to protect Americans against the deadly Chinese virus.

No matter for leftists, because Mr Lindell likes Trump, and also believes in God.

The My Pillow guy Mike Lindell says this: "God gave us grace on November 8, 2016, to change the course we were on. God had been taken out of our schools & lives, a nation had turned its back on God. I encourage you to use this time at home to get back in the word. Read our Bible" pic.twitter.com/tRdlubE08u

And now the My Pillow guy is urging us all to return to God and read our Bibles at home, as we realize how amazing Trump's glorious leadership has been, and no, I am absolutely not kidding, and my God, we are all going to die.

Trump just had the My Pillow guy speak.

The My Pillow Guy.

These aren't press conferences to calm the American people. They're infomercials for Trump and his friends.#StopAiringTrump

I’m a proponent of TV carrying Trump’s presser. But allowing corporations to use them as advertising platforms seems like the exact opposite of news.

Trump now has the guy from My Pillow doing a campaign commercial for Trump's 2020 campaign in the middle of a press conference about a deadly virus. How can any real news network air this BS?! #StopAiringTrump

Trump is letting leaders of corporations speak. This is supposed to be an update on the coronavirus by doctors for the American people. Not a way to applaud Trump and his donors. And not one word about the thousands of Americans who have died. This is demented. #StopAiringTrump

Reminder: We live tweet these clips to fact them.

Trump has the My Pillow guy (Mike Lindell) briefing the nation on the pandemic. Lindell gave $100,000 to the Trump Victory committee in 2018. pic.twitter.com/SzVWV2t3Wi

Are you f cking kidding me, HE HAS THE MY PILLOW GUY ON TO SELL HIS GARBAGE PRODUCT DURING A PANDEMIC BRIEFING???!!!

In case you were wondering what My Pillow is doing in a time of coronavirus. https://t.co/W3ocMJe7Ym

Trump just called the “My Pillow” guy up to the podium in the Rose Garden. You cannot make this stuff up.

Dear Trumpists, *this* is why media doesn't want to cover your God-Emperor's coronavirus rallies: because the g*ddamned My Pillow CEO was holding forth from the lectern on a day that 500+ Americans died and 20,000+ got sick from the virus the briefing was *intended* to focus on. https://t.co/z7FSMxLwUi

Now Trump is having the My Pillow guy speak. This is absurd. #StopAiringTrump

The #MyPillow guy is virulently anti-#LGBTQ and Trump just gave him a platform and millions in free advertising from the Rose Garden at a briefing on the #CoronavirusPandemic. At least @CNN cut away as soon as he took the podium.

Ok leftists, gather up your crayons and take notes…

Now they're mad at Trump for allowing the My Pillow founder, someone who changed 75% of his factories over to mask production, 50,000 of which a day will go to front line medical workers, to speak at the White House.

Does your derangement stop at nothing?#StopAiringTrump

I actually love that the WH briefing included CEO’s, each of whom explained how their business is joining America’s all-hands-on-deck effort to fight Coronavirus — in which the private sector has been & will be absolutely vital.

While @CNN was cutting away from “The My Pillow Guy” @realMikeLindell announced that he is producing 10,000 masks a day and is aiming to start producing 50,000 per day by Friday to help in the fight against the Coronavirus.

What is CNN doing to help out?https://t.co/2RM25MQLDN

An American small businessman gets invited to the White House to talk about how his company is stepping up to help the crisis and the blue check mark brigade savages him online.

Having an Executive Editor of CNN belittling a small businessman whose company is shifting gears to make masks for nurses and doing the belittling by retweeting a partisan hack from Vox is everything wrong with the media right now. https://t.co/koTlJoI5u2

The same press that bashes American citizens when they dare criticize overtly biased reporting turn to bashing American companies for having the audacity to shift production and make supplies desperately needed by doctors and nurses.
WTH with the hate?

50,000 masks per day for healthcare workers. 75% of his company’s production has been repurposed to help the country. https://t.co/4IQlfG77FT

“Like Watching a Horror Movie”: Sweden’s Liberal Approach to Coronavirus Under Fire