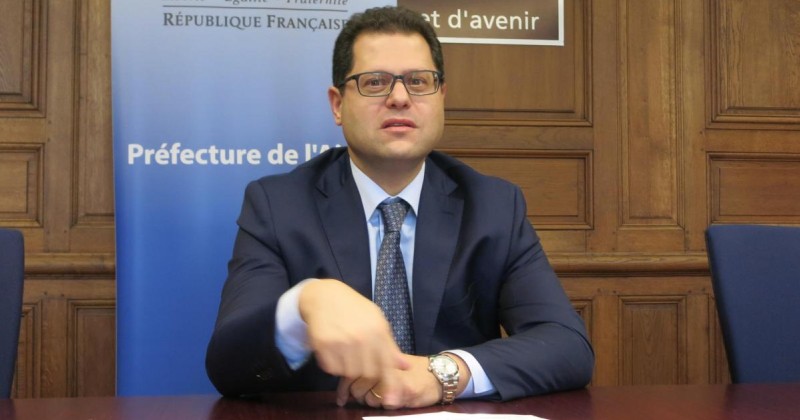 Residents on lockdown in an area of France are now prohibited from buying alcohol after a local official banned all sales.

The Préfet of the Aisne département in north east France issued a directive that went into force this morning which forbids shops from selling alcohol to be consumed off premises.

The order was given by Ziad Khoury, who has also mandated that shops cannot stay open after 8pm.

The Local reports that Khoury made the decision because he is “concerned about the link between alcohol and violence, especially domestic violence.”

“Excessive consumption of alcohol is likely to create increased disturbances and violence, especially within the family,” claimed Khoury.

The reasoning behind the ban seems ludicrous given that consuming alcohol is probably one of the primary methods many miserable people under quarantine are copying with the stress.

The ban will last until the end of the current lockdown on March 31st, although this is almost certain to be extended.

Poll: 100% Of Americans Expect To Get Coronavirus

Biden Can’t Stop Touching His Face During The View Appearance

Neighbors snitched on them. 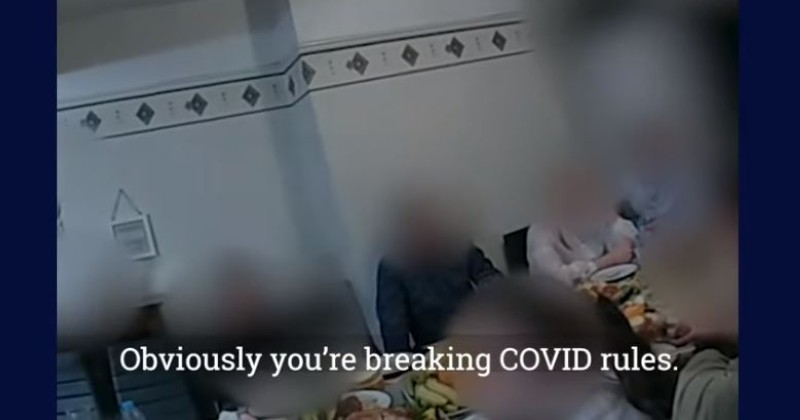 A video out of the UK shows police in London entering a home to break up a baby shower party after a neighbor snitched on the family.

The clip shows officers entering a property in Hornchurch in east London to find 20 people sat round a table which is full of food. There is an archway of pink balloons at one end of the room.

“We’ve had a call because you’re all here. Obviously, you’re breaking Covid rules,” states one of the officers after asking who lives at the address.

“We can fine every adult here, every single one of you. £200 each it is. Because you’re breaking the rules,” the female cop adds.

Metropolitan Police say two men were fined £200 each and the rest of the guests were told to leave immediately.

“A gathering like this can have tragic consequences for all those involved and risks spreading this terrible virus to our loved ones and the wider community,” he added.

“Please have no doubt, we are determined to deal robustly with those who breach the Covid regulations in this way.”

As we previously highlighted, another video showed police entering a home in Scotland after a tip off from a neighbor and arresting family members.

If you’d have told people a year ago that cops would have the power to enter homes to fine family members and friends for having a dinner party, they’d have called you insane.

Now everyone meekly accepts it, with polls in the UK showing widespread public support for lockdown measures.

As we highlighted earlier, police are also threatening people with fines if they enjoy winter weather.

The UK is currently under its third national lockdown which could run all the way to summer.

Video: Texas Police Officer Threatens to Taser Man For Not Wearing a Mask

“I will tase you right now!” 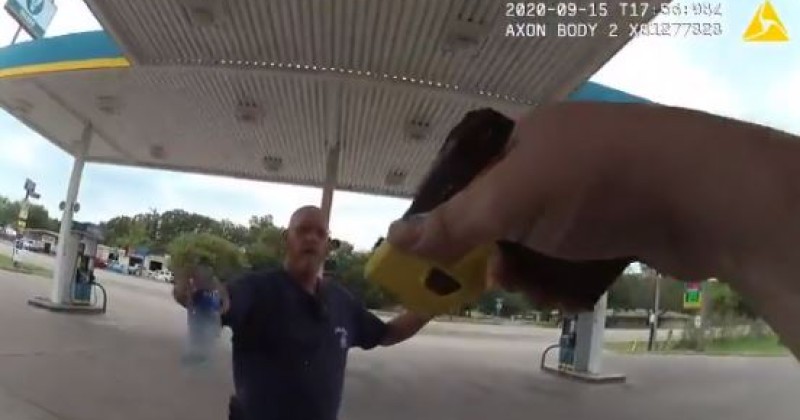 A video out of Texas shows a police officer threatening to taser a man for not wearing a mask inside a gas station store.

The clip shows the officer entering the store and immediately barking at the man, “Where’s your mask at?”

“What mask?” he responds.

“The mask that you’re required to wear by city ordinance,” responds the officer.

Police threatening a man in Texas for not wearing a mask. pic.twitter.com/wvVTfFaWOz

The cop then tells the man to leave the store, adding, “Don’t argue with me, it’s real simple.”

The man, who noted that the officer’s mask had slipped down, is carrying a gun as is his right under Texas law.

As the man follows the order and leaves the store, the cop then draws his weapon and says, “I will tase you right now!”

Despite the fact that the man has left the store and is no longer required to wear a mask, he is detained anyway and told to put his hands up.

“Get your hand up now!” shouts the officer as he calls for backup. “Dude, you’re just dumb, you should be listening!” he adds.

“You move again, I’m gonna drop you!” says the cop despite the fact that the man is complying.

“It was simple, all you had to do was step outside and put a mask on,” says the officer as he disarms the man’s gun before claiming the man is “uncooperative” despite the fact that he is stood with his hands on his head.

The video ends with the cop pointing the taser at the man.

Some respondents to the video said the man should have complied, but others asserted that the officer took it too far.

“Talk about over reaction by an officer! I’m always for the police but this is ridiculous,” said one.

“But they cannot control the people burning down their cities? Our world is upside down!!” added another. 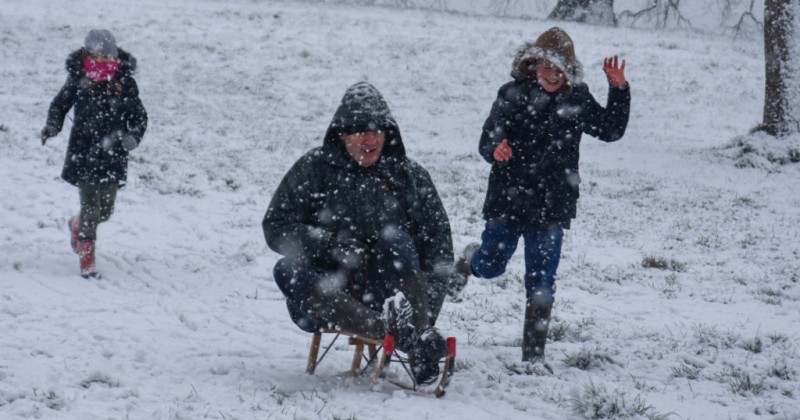 Police in the UK enforcing coronavirus lockdown restrictions are threatening people with £200 fines if they engage in snowball fights or sledging.

Snow fell in many parts of the country over the weekend, providing a welcome distraction to the fact that the country has been under some form of lockdown for the best part of 10 months.

However, this prompted authorities to become even more draconian, urging people not to engage in snowball fights or sledging or face the risk of being fined.

“We are currently receiving lots of calls and reports relating to snowballs being thrown and people outside sledging,” tweeted Surrey Police. “Please stay safe and remember that Covid regulations do still apply.”

Wiltshire Police inspector Louis McCoy was more insistent, tweeting, “I don’t want to be dealing with sledgers and snowball fights. There’s still a lockdown on. Think about it, don’t be tempted.”

Naturally, drive safe if you have to go out for essentials. Also a note to everyone, I don’t want to be dealing with sledgers and snowball fights. There’s still a lockdown on. Think about it, don’t be tempted.

Swindon Police posted a message to Facebook announcing that they were keeping tabs on snowball fights.

“We are currently responding to reports of about 150 children and about 50 adults gathering in the Sevenfields area of Swindon and concerns have been raised that they are not abiding by the coronavirus guidelines,” said the force.

“Please do not gather in large groups – you are reminded that Fixed Penalty Notices may be issued to those who do not abide by the regulations.”

“We are in the midst of a pandemic and failing to socially distance and wear face masks could aid the spread of the virus.”

Meanwhile, Kingston Police urged people not to go out and enjoy the snow at all, tweeting that they should only look at it “from the comfort of your own home” as “there’s a pandemic going on.”

It's so beautiful to watch the snow fall from the comfort of your own home. Plus there's a pandemic going on. #StaySafe in the #snowday by playing in the back garden!

Four men traveling in a car in Guildford were also hit with £200 fines each after they told police they were “looking at the snow.”

As we previously highlighted, engaging with snow is seen by authorities as a dangerous contravention of lockdown rules.

West Mercia Police attracted ridicule when the force angrily tweeted about “2 reports of snowballs being thrown” in violation of coronavirus lockdown rules.

A large snowball fight in a park in Leeds also attracted media condemnation despite students involved claiming they were just trying to blow off some steam to combat mental health problems caused by lockdown.

Avon and Somerset Police also fined someone for eating a kebab in their car alone while Derbyshire Police interrogated two women for drinking coffee while on a rural walk.

The UK remains under total lockdown with powers recently extended until July, meaning the country could still be under such restrictions until the summer.