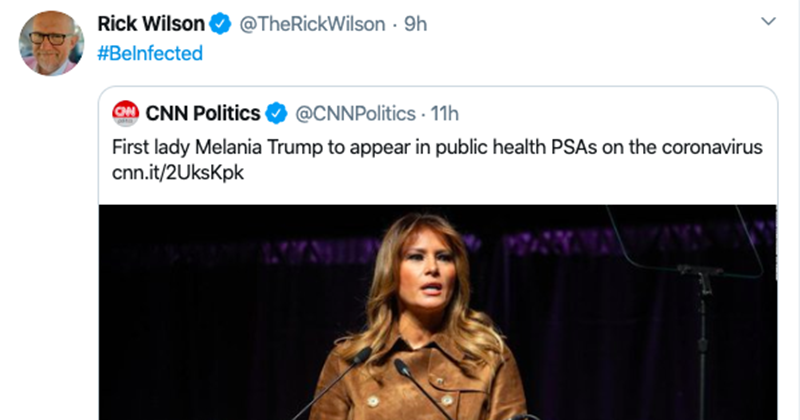 Twisted talking head Rick Wilson sent out a tweet Wednesday expressing a desire to see the First Lady get infected with the killer coronavirus.

Wilson, who regularly appears on CNN and MSNBC programming to bash the President, was reposing to the announcement that Melania Trump will appear in coronavirus PSAs.

Wilson, a former GOP strategist, was most recently in the news when he and CNN’s Don Lemon, along with New York Times op-ed writer Wajahat Ali, traded impressions of ‘dumb redneck’ Trump supporters on air.

The arrogance, the dismissiveness, the smug cackling, the accents.

If Donald Trump wins re-election this year, I’ll remember this brief CNN segment late one Saturday night in January as the perfect encapsulation for why it happened. pic.twitter.com/8kQ6zN9AZV

The exchange was later used by the GOP in ads to show how elitist and out of touch with everyday Americans these vile leftists are:

THIS is what the liberal elites think of you.

Prove them wrong where it counts—at the ballot box in November! pic.twitter.com/cmhPJjPT65

Following backlash, Wilson doubled down, calling the response “contrived phony bullshit outrage,” and using the attention to advertise his anti-Trump book titled ‘Running Against the Devil.’

The most beautiful part of this entirely contrived phony bullshit outrage about that segment isn’t that I insulted the Maga demo.

The best part is how they’re repeating the now-classic #UCrane bit and amplifying a line that clearly made @realDonaldTrump furious. pic.twitter.com/rNr1skjYZ1

1/ The fundamental underpinning of the fake outrage is simple.

The MAGA world wants the freedom to attack, insult, demean, and abuse anyone who doesn’t aggressively worship Donald Trump.

They can’t stand anyone who punches back, and hope they can intimidate or shame me.

2/ At the top of the pyramid are the Trump email grifters and Fox News outrage hustlers. They recognize that all that is left inside the Republican Party as an ideology is a hatred of elites and the media.

They hope that they can shield their bad behavior, pathologies, willful ignorance, weaknesses, credulity, nature, and worship of Donald Trump behind a “how dare you talk down to me” anger without response.

Wilson has also previously called for the donor class to “put a bullet in” Donald Trump, and has also suggested that anti-vaxxers should be put in re-education camps and have their children taken away.

Wilson has also expressed hope for a recession so that Trump’s reelection chances would be hurt. 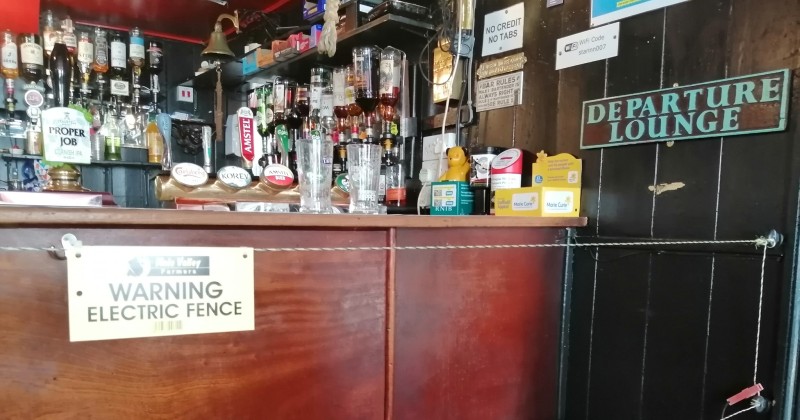 A pub landlord in the UK has installed an electric fence around his bar in order to enforce social distancing, telling the BBC that customers keep away from it because “people are like sheep.”

Jonny McFadden, who runs the Star Inn in St Just, Cornwall, said the fence is “just a normal electric fence that you would find in a field.

In other words, McFadden is using the same device against his customers that farmers use to control the movements of livestock.

Indeed, he told the BBC, “People keep away from it, people are like sheep.”

The landlord refused to be pinned down on whether the fence actually gave off an electric shock, but warned, “Come and find out – there is a fear factor and it works.”

McFadden appeared to be surprised that customers weren’t strictly observing social distancing rules because “when you serve people a drink they change.”

People getting close to each other when they’re drunk. Who would have thought it?

As we highlighted earlier, face masks will become mandatory for anyone entering shops in England From July 24 onwards, with refusniks being hit with an on the spot £100 fine.

This led the head of the London Metropolitan Police Foundation to denounce the new law as completely unenforcable.

“We’ll be driving round and round London looking for people who weren’t wearing masks, it’s absolutely absurd,” said Ken Marsh, noting that the likelihood of shop staff trying to enforce the law wouldn’t work because they don’t have the power to detain people. 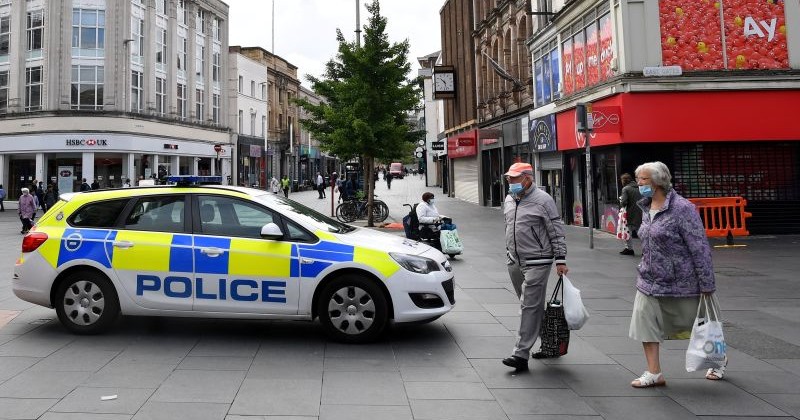 The Chair of the London Metropolitan Police Foundation says it will be “nigh-on impossible” to enforce a new law which makes the wearing of face masks mandatory in all shops in England from July 24.

People who refuse or forget to wear the masks face a possible £100 fine for non-compliance, but according to Ken Marsh, who represents police officers in the capital, imposing the new law is virtually inconceivable.

“We’ll be driving round and round London looking for people who weren’t wearing masks, it’s absolutely absurd,” said Marsh.

He pointed out that the burden would fall on shopkeepers to stop refusniks, although since they have no power to detain, individuals would just leave before police could arrive.

Peter Cowgill, chairman of UK clothing outlet JD Sports, said that store employees shouldn’t be expected to try to enforce the law and that the outcome would just be less people shopping.

While health authorities have repeatedly insisted that wearing face masks helps stop the spread of COVID-19, the evidence is dubious at best.

The WHO only advocated face masks after political lobbying despite the science being unconvincing.

“The World Health Organization committee that reviewed the evidence for the use of face coverings in public didn’t back them. But after political lobbying, the WHO now recommends them,” reported BBC Newsnight.

Face masks were also widely used by Chinese people in Hubei province both before and during the original coronavirus outbreak, with seemingly little effect.

As Toby Young explains, forcing people to wear face masks in shops will only deter more people from going shopping, further damaging any chance of a proper economic recovery.

“One of the most depressing things about this Government’s diktat is that it will mean people are even less likely to go shopping than they were when non-essential shops were allowed to re-open on July 4th,” he writes.

“It’s as if the Government is determined to destroy the high street. First, it insisted on the closure of non-essential shops; then it allowed them to re-open, but only on the proviso that they put ridiculous social distancing measures in place, such as limiting the number of people that can be inside at any one time and insisting that anyone entering use hand sanitiser; now they’ve decided to make the shopping experience even more unpleasant. It’s the final blow, surely? Who will bother to go to a shop when they can get everything delivered to their front door?”

WHO Will Not Investigate Wuhan Lab Where Coronavirus Was Kept

Globalist Health Organisation has already discounted lab leak theory before it even sets foot in China. 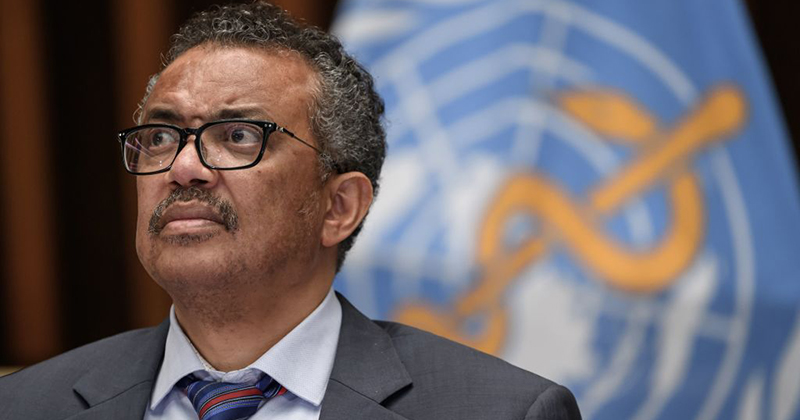 The World Health Organisation announced Monday that it will not be visiting the Wuhan Institute of Virology during its investigation into the origins of the coronavirus, despite the fact that the lab held samples of coronavirus that were almost exactly the same as that which caused a global pandemic.

The WHO stated that its mission will only seek to “advance the understanding of animal hosts for Covid-19 and ascertain how the disease jumped between animals and humans”.

As The Independent notes, the announcement suggests that the theory of the virus being modified or leaking from the lab in Wuhan has already been completely discounted by the WHO.

In addition, the body has refused to provide any details of the locations it will be visiting during its investigation in China.

As The Independent report notes, “It had previously emerged the lab had held a coronavirus sample that was 96.2 per cent the same as Covid-19 for almost a decade. This prompted speculation about the origin of the virus…”

It also previously emerged that the Wuhan Institute of Virology took a shipment of some of the world’s deadliest pathogens just weeks before the outbreak of the coronavirus. It is also known that the lab was tampering with natural pathogens and mutating them to become more infectious.

The latest development comes amid reports that Chinese virologists have fled Hong Kong and effectively defected to the West with evidence against the Chinese Communist Party concerning its role in the COVID-19 pandemic.