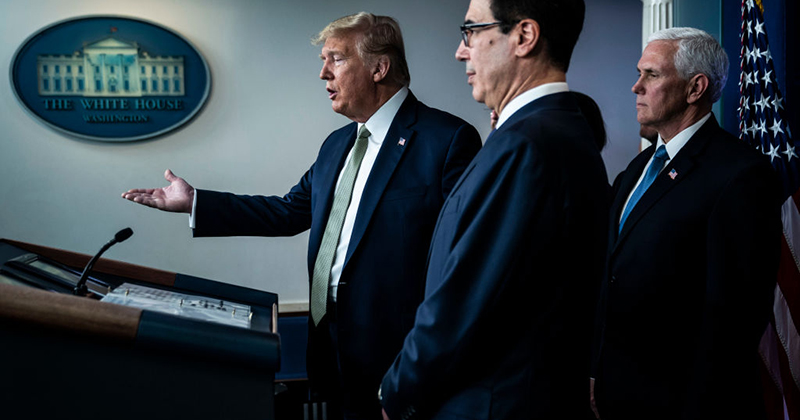 They’re still at it…

The media is STILL upset that Trump calls it the 'Chinese Virus'.

In doing so, they're still amplifying rhetoric directly from the Chinese Communist Party that to do so is "racist," despite the fact that it's completely accurate.pic.twitter.com/exq0AUgX6K

– Massively spread because China covered it up for a month.

– China threatened to withhold medical supplies which they have a near monopoly over.

Media to Trump: Boo hoo, stop being mean to China.

As more and more people succumb to the killer coronavirus all over the globe, and as governments begin to lockdown and restrict movement and freedoms of populations, journalists in the US are still complaining that President Trump is using the term “the Chinese virus”.

As we noted yesterday, leftists and the US media are in lockstep with the communist Chinese government, accusing the President of ‘racism’ for using the term, even though the virus provably originated in China.

The mindlessness continued Tuesday during a press briefing, when a reporter told Trump that “critics say that using that phrase creates a stigma.”

The President fired back “No, I don’t think so. I think saying that our military gave it to them creates a stigma.”

President Trump asked about his use of the phrase “Chinese Virus”:

REPORTER: “Critics say that using that phrase creates a stigma.”

TRUMP: “No, I don’t think so. I think saying that our military gave it to them creates a stigma.”

Trump was referring to the fact that the Chinese government continues to suggest that the virus did NOT originate in China, and that it was spread by the American military.

“Well China was putting out information which was false, that our military gave this to them, that was false,” Trump said.

Trump later used the phrase again in a tweet:

The United States will be powerfully supporting those industries, like Airlines and others, that are particularly affected by the Chinese Virus. We will be stronger than ever before!

Today, he continues to use the phrase:

I will be having a news conference today to discuss very important news from the FDA concerning the Chinese Virus!

I always treated the Chinese Virus very seriously, and have done a very good job from the beginning, including my very early decision to close the “borders” from China – against the wishes of almost all. Many lives were saved. The Fake News new narrative is disgraceful & false!

For the people that are now out of work because of the important and necessary containment policies, for instance the shutting down of hotels, bars and restaurants, money will soon be coming to you. The onslaught of the Chinese Virus is not your fault! Will be stronger than ever!

The #Coronavirus has now been very deliberately renamed the “Chinese Virus” by Trump to deflect his incompetent handling of a pandemic. If you’re cool with this, and his incitement of hate towards innocent Asian-Americans, it’s simply because you’re a fucking racist. Period.

There it is. I’ve been deathly afraid of this exact moment where Trump turns to racism and xenophobia and calls COVID-19 the “Chinese Virus.” We are in deep trouble as a nation now that President of the United States makes the conscious decision to go down this dark path of hate.

Donald Trump is showing his true, racist colours by calling it the "Chinese Virus"

It's not the "Chinese Virus". It's a global pandemic

No matter that the media was calling it the Chinese virus before Trump was:

Here is video montage of the fake media calling the Virus the “Chinese Wuhan Virus” right before calling the President a racist xenophobe for rightfully doing the same. These people are corrupt to the core pic.twitter.com/O9lXMEoziW

Meanwhile, the Chinese government has permanently expelled US reporters from the Wall Street Journal, The Washington Post, and The New York Times. Other US journalists in China are facing heightened communist scrutiny.