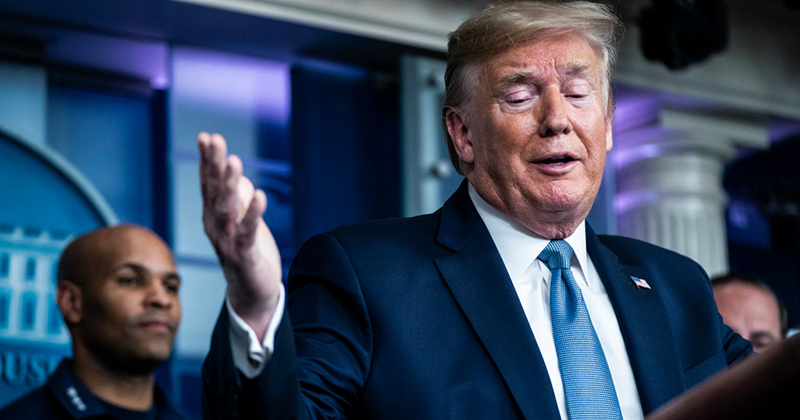 The Chinese government has hit out at President Trump’s description of the Coronavirus as “The Chinese virus,” declaring that the US should “learn to take care of its own business.”

The United States will be powerfully supporting those industries, like Airlines and others, that are particularly affected by the Chinese Virus. We will be stronger than ever before!

The Chinese foreign ministry did not take kindly to the description, accusing Trump of “insulting China”.

Spokesman Geng Shuang said “Some US politicians have tried to stigmatise China … which China strongly condemns,” adding “We urge the US to stop this despicable practice. We are very angry and strongly oppose it.”

Chinese state media framed the description of the virus as racist:

What a president! By labeling the COVID-19 “Chinese virus,” Trump tries to hide his administration's lack of prevention & control measures against the #coronavirus. He passes the buck to China, trying to prove that he is NOT responsible for the current situation the US is facing. https://t.co/LubdzY1G1y

Despite the reality that the virus originated in China, an undeniable fact, leftists are in lockstep with the Communists, agreeing whole heartedly that Orange man is indeed bad for calling the virus Chinese:

Dear @realDonaldTrump: Asian Americans will likely encounter more discrimination because of your tweet below. Please stop your unnecessary rhetoric.#COVID19 is now an American virus, an Italian virus, a Spanish virus. We all are impacted & we all need to work together. https://t.co/yLzNmpJZHs

Of course he called it "Chinese Virus," because he doesn't care that Asians and Asian Americans are subjected to hate violence because of this racist description of #coronavirus. https://t.co/g5ewbNhteE

Oh it’s racist when trump calls it the Chinese virus. But no one batted an eye when the topic of the Spanish flu was eradicating at its time. It originated in China. It’ll be known as that. Cry baby.

If you insist on being racist in calling this "Chinese Virus" then it is ok to call this "Trump Virus", right?#IllegitimatePresident #UnfitToBePresident

STOP CALLING IT THE CHINESE VIRUS!!! That is not right and is squeamishly racist. It's called the #coronavirus or #COVID19. You are supposed to be a leader!

Wuhan, China was indeed the first site of outbreak. Calling it Chinese Virus is not racism. Those who bully and discriminate Asians are real racists.

The Virus is Chinese it started in China. China tried to cover it up and Lied about it. Trump offered to send help to China and China refused. The Truth is not Racist.

Despite the fact that the Chinese government attempted to hide the outbreak for weeks and lied about the true scale, it has lauded its own response to the outbreak in an editorial Tuesday, and demanded that the rest of the world should follow its own example.

The China Daily (state media) editorial claimed that Singapore, Japan and South Korea all “based their responses on the experience and lessons drawn from China’s successful battle with the virus”.

The Communist regime lectured European countries for not acting quickly enough, noting that “Despite the unmistakable seriousness of the situation, some countries have tried to play down the risks.”

“The measures they have taken are not only insufficient to control the pandemic at home, but also not enough to prevent themselves from being the source of virus transmission to other countries.” it also stated.

Elements within the Chinese government also continue to suggest that the virus did NOT originate in China, and that it was spread by America.