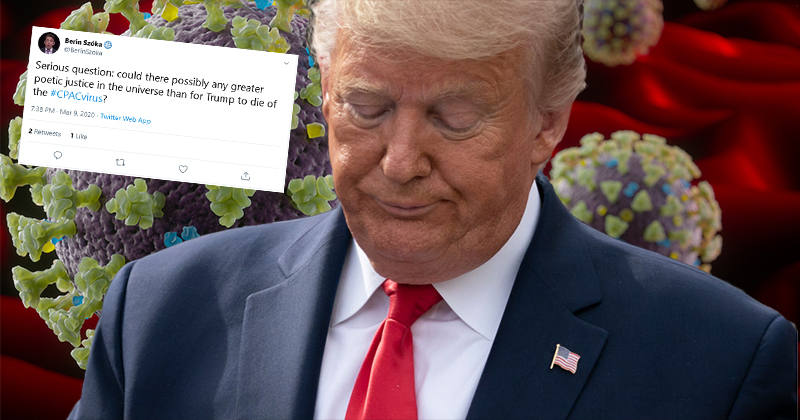 The head of a Google funded tech think tank has been forced to resign after he tweeted that it would be “poetic justice” to see President Trump contract the coronavirus and die.

TechFreedom head Berin Szóka announced Friday that he is going on an “indefinite sabbatical” to write a book, according to Politico.

The move comes after Szóka received huge backlash for a tweet on Monday, which he has since deleted, fantasising about Trump’s death from coronavirus.

“Serious question: could there possibly any greater poetic justice in the universe than for Trump to die of the #CPACvirus,” Szóka tweeted. 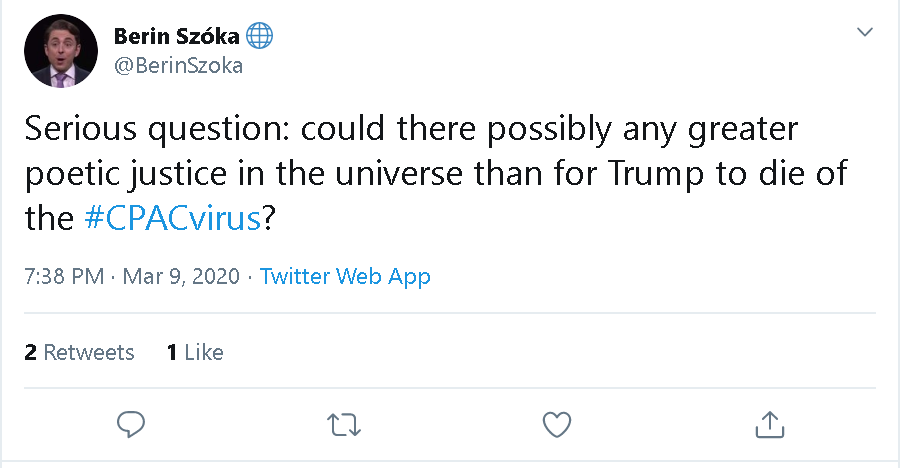 The CPAC reference stemmed from one person who attended the Conservative Political Action Conference having tested positive for the virus. Trump gave a speech at the same conference in February.

Szóka’s TechFreedom group describes itself as ‘libertarian-leaning’. It has financial ties to Charles Koch, who has frequently voiced opposition to Trump’s China policy. The think tank has also been funded by Google.

As soon as Szóka realised what a monumental idiot he sounded like in the tweet, he started walking it back, further tweeting “I’d never wish death upon anyone but I get why people read it that way. For that, I’m sorry.”

“Like many, I’ve been distraught at systematic downplaying of this crisis. My tweet came not from a place of malice but from deepest concern. It doesn’t express my organization’s opinion.” he added.

On Thursday, he tweeted again, apologising in an effort to mitigate the backlash:

Earlier this week, I sent a thoughtless tweet making an inappropriate comment about the President that I deeply regret. I was wrong to tweet it and deleted it. Again, I apologize.

However, it all appears to have been too little too late.

Meanwhile, after the leftist media attempted to hijack the President’s coronavirus briefing on Friday, Trump announced that he will likely be getting tested for the virus soon, but played down concerns that he was exposed to it after being pictured with a Brazilian official who has since reportedly tested positive.

Trump says he will probably get tested soon for the coronavirus https://t.co/sXNnZHpPqV

As per usual, so-called "journalists" attempted to hijack the #TrumpPressConference to act out their Trump derangement syndrome and failed miserably.

They will stop at nothing, not even a global pandemic, in their efforts to undermine him.

Speculation is once again raging that President Trump has coronavirus after a press conference in which Trump appeared to be under the weather.https://t.co/hBj3Woe4S0

Speculation That Trump Has Coronavirus Rages Again After Press Conference