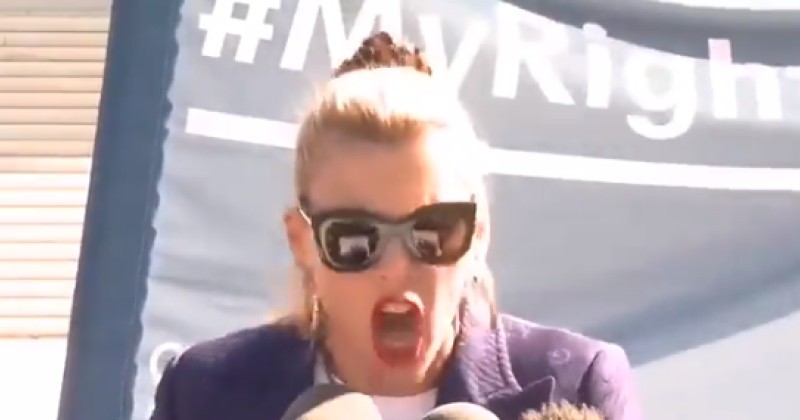 Actress Busy Philipps gave a speech at a pro-abortion rally during which she angrily screamed about how proud she was for having an abortion because it helped advance her career.

Philipps gave the speech outside the U.S. Supreme Court at an event to protest a law coming out of Louisiana that would require abortion doctors to have admitting privileges to local hospitals.

“There I was sitting in Los Angeles in my beautiful office of my own late-night talk show. Soon I would be driving my hybrid to my beautiful f**king home to kiss my beautiful and healthy children and my husband, who had taken the year off to parent so I could focus on my career, and I have all of this! All of it! Because, because, because I was allowed bodily autonomy at 15,” Philipps screeched.

Actress @BusyPhilipps said she owes all of her success to having an abortion at 15, continues: "I will never stop talking about my abortion or my periods or my experiences in childbirth, my episiotomies, my yeast infections, or my ovulation that lines up w/ the moon!" pic.twitter.com/ZoW6CM1HfD

During the same event, Minority Leader Chuck Schumer (D-NY) appeared to threaten Supreme Court Justices Neil Gorsuch and Brett Kavanaugh when he stated, “I want to tell you Justice Kavanaugh and Justice Gorsuch: You have unleashed a whirlwind, and you will pay the price.”

Meanwhile, here’s a video of a baby inside a womb to remind you of how utterly disgusting and vile it is to celebrate abortion.

If every Irish person who voted for abortion had seen this video, if they had a shred of humanity or compassion, they couldn’t have voted for it. 1,000 babies like this precious one are being murdered in our hospitals every month. What sort of a country has #Ireland become? pic.twitter.com/bi9w78tQ3j

WHO Warns Against Coronavirus Thought Crime

‘White People Not Welcome’ Event to Take Place in Brussels