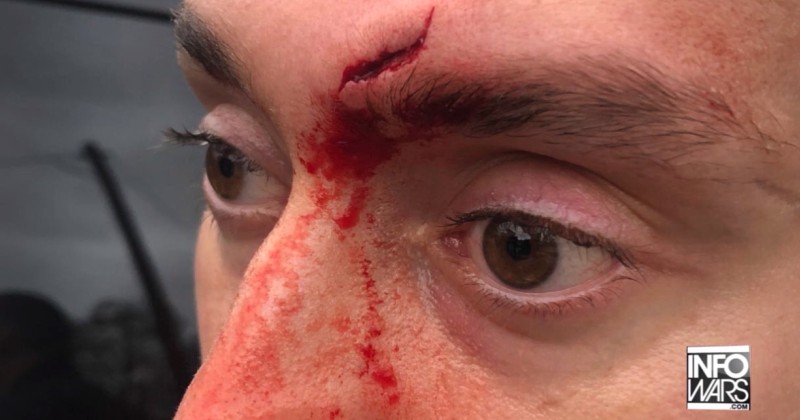 Journalists and security guards were attacked by violent Bernie Bros in Austin, Texas yesterday, with one having to visit hospital to receive stitches after having his head gashed.

One of the security guards revealed what happened to him and his colleagues when Owen Shroyer began bullhorning during the event.

“As soon as Bernie went on stage and Owen tried to give some counter-points with the bullhorn, we were immediately rushed by a number of very aggressive individuals,” said the security guard.

Shroyer and his security were situated well outside the perimeter and where police officers had said they were allowed to be. They did not attempt to insert themselves into where the Bernie supporters were located.

“There were people on the perimeter that were Bernie supporters and as soon as Owen started with his counter-message they rushed us,” the security guard added, noting that a man wearing a black bandana used a large steel flashlight as a threatening weapon while another tried to physically grab Shroyer’s bullhorn. 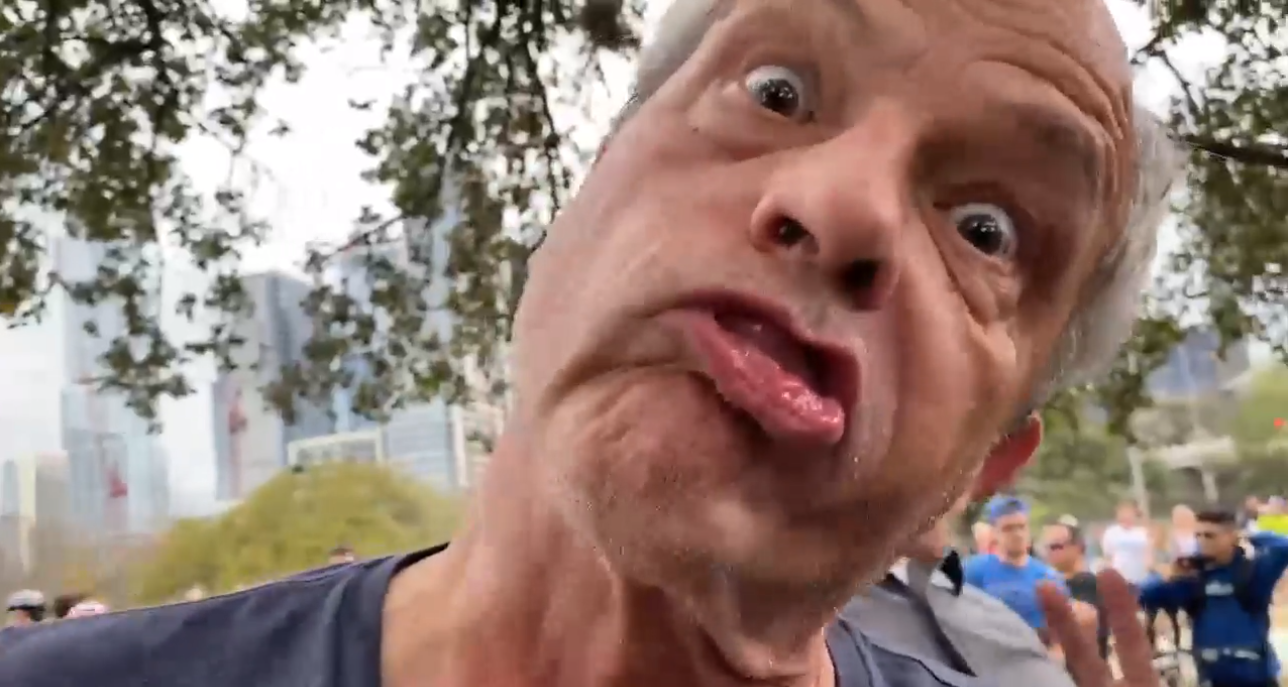 During this confrontation, a security guard was left bloodied and had to be taken to the hospital to receive stitches. Police were nowhere to be seen during the scuffle.

“I promise you, these people were not peaceful, they were literally preparing themselves, masking up, getting metal objects into their hands, into their pockets, they were looking for a confrontation,” said the security guard.

Other clips from the confrontation showed Bernie supporters acting out in bizarre ways, including one older man who pulled strange faces into the camera while Shroyer was bullhorning.

Clinton Advisor: Bernie Sanders “Will Get Massacred By Trump” 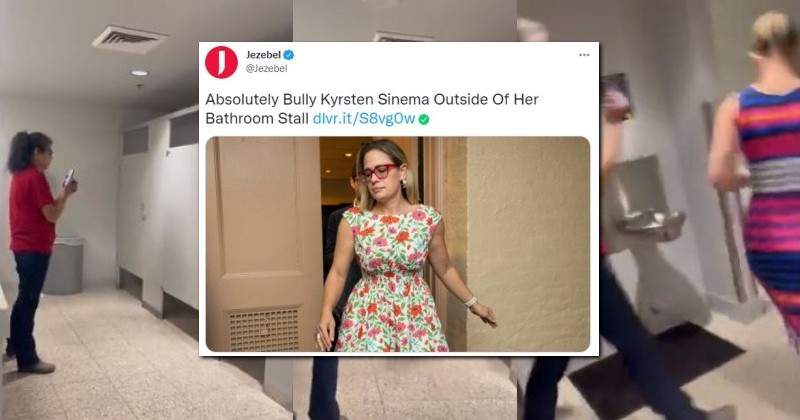 Left-wing feminist website Jezebel is receiving criticism after openly calling for Sen. Kyrsten Sinema, who was stalked and followed into a bathroom by immigration activists, to be ‘bullied’ because she doesn’t support the Biden spending bill.

Activists from Living United for Change in Arizona (LUCHA), which campaigns for loosening immigration laws, were seen on film harassing Sinema over her opposition to a spending bill that the Biden administration is trying to pass.

Sinema received harassment from the demonstrators, at least one of whom was an illegal alien, before being pursued into the bathroom.

“We knocked on doors for you, to get you elected. And just how we got you elected, we can get you out of office if you don’t support what you promised us,” one of the activists states as Sinema enters a stall.

Protesters followed Sen. Sinema into the bathroom at Arizona State University to confront her on Build Back Better and immigration pic.twitter.com/NDSmeu0h2M

While most people condemned the confrontation, feminist website Jezebel celebrated it with a tweet and headline asserting, “Absolutely Bully Kyrsten Sinema Outside Of Her Bathroom Stall.”

Conservatives were quick to respond.

“If this happened to AOC, and it was conservatives following her into the bathroom, you would cry about it nonstop for the next 15 years,” wrote Matt Walsh.

If this happened to AOC, and it was conservatives following her into the bathroom, you would cry about it nonstop for the next 15 years

Others pointed out the hypocrisy of what the response would be if AOC had received the same treatment at the hands of conservatives.

Cabot Philips highlighted how the same publication had dismissed “free speech” as a legitimate justification for bullying women.

The tweet is clearly a direct violation of Twitter’s rules on bullying and harassment which state;

“We prohibit behavior that encourages others to harass or target specific individuals or groups with abusive behavior. This includes, but is not limited to; calls to target people with abuse or harassment online and behavior that urges offline action such as physical harassment.”

Jezebel is directly inciting people to harass Sen. Kyrsten Sinema, but don’t expect the Silicon Valley giant to take any action against their account.

The activists themselves are now being probed by authorities in Arizona and could be hit with over 2 years in jail due to the crime of filming someone in a bathroom without their consent being a class 5 felony. 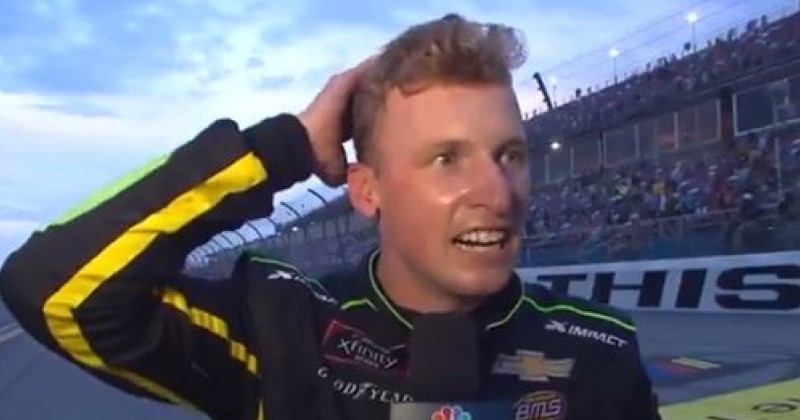 An NBC reporter scrambled into damage control after a crowd of NASCAR fans started chanting “f**k Joe Biden!”, with the interviewer ludicrously claiming they were actually chanting “Let’s go Brandon!”

The incident happened on Saturday evening after Brandon won the NASCAR Xfinity Series Race at Talladega.

Almost immediately after the interview began, the crowd was clearly heard to chant “f**k Joe Biden!”

As the chant grew louder, its wording became even clearer.

Not according to the reporter, who swiftly moved to clarify that the fans were chanting “let’s go Brandon!”

It’s hard to give the reporter the benefit of the doubt and say she misheard the chant given its volume and clarity.

The chant has also become a popular refrain for sports fans nationwide over the course of the last month, most notably at football stadiums, so it’s not as if it’s a brand new phenomenon.

“In recent weeks, new polls by Axios/Ipsos found trust in the president continues to slide. The first real glimpse of Biden’s poll slippage was in late July when a Gallup poll found his approval ratings began to turn lower,” reports Zero Hedge.

“Compound the botched exit of Afghanistan, southern border crisis, and soaring food, gas, and rent prices; it is no surprise that the president’s ratings continue to tumble and the “F**k Joe Biden” chants grow louder, forcing corporate media into damage control.”

Yet Another Unseen Photo of Justin Trudeau Wearing Blackface Emerges 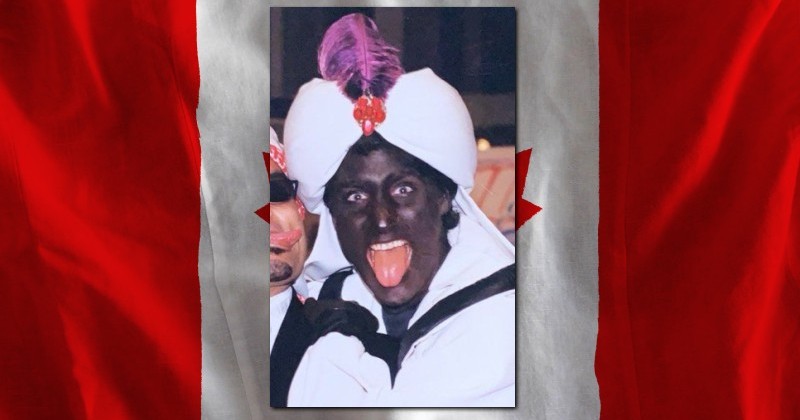 Yet another photo of Canadian Prime Minister Justin Trudeau wearing blackface has emerged – with the latest example being the clearest yet.

Trudeau has appeared in public wearing blackface on at least three separate occasions, one when he was a teacher and one when he was a student, as well as at a 2001 event when he dressed up in an Aladdin costume.

The latest example is from the 2001 event at the West Point Grey Academy, when Trudeau was 29-years-old.

A new photo of Trudeau in blackface has leaked.

Unlike the original black and white image that emerged from this event, which was first released in 2019, this one is in glorious full color and shows the Canadian leader sticking out his tongue, apparently enjoying the moment.

After the last controversy two years ago, Trudeau responded by saying he “deeply, deeply” regretted wearing blackface and admitted it was racist.

While this is a new photo, this is from this already known occurence/party. (And not from yet one more time he did it)

This led many of his critics to note how many of the most woke people in contemporary politics espouse such beliefs partly because they are compromised and guilty about previous behavior.

For the second time in two years, Canadians are heading to the polls to vote in an early general election.

Despite recent polls showing a statistical tie between Trudeau’s Liberals and the Conservatives, the result will likely see Trudeau forming another minority government, rendering whole exercise rather meaningless.

THANKS TRUDEAU. For making blackface acceptable (because apparently nobody cared) pic.twitter.com/TX9FThQOl8