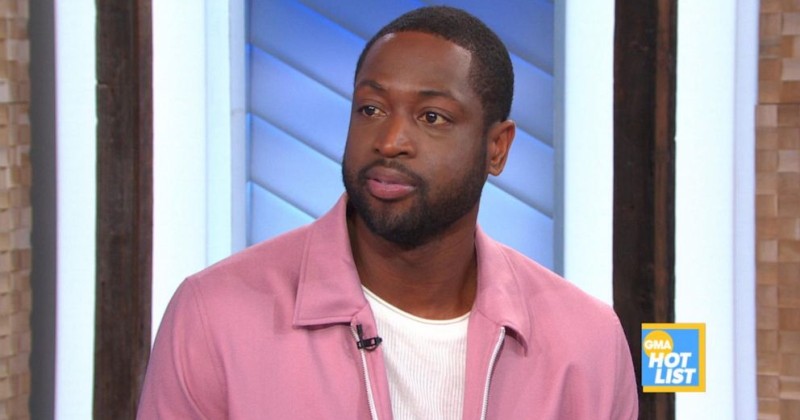 Former NBA star Dwyane Wade says that his son (who know identifies as a female) knew he was transgender at the age of 3-years-old.

During an appearance on The Ellen DeGeneres Show, Wade revealed that his 12-year-old son Zaire was now transgender, going by the name Zaya and using she/her pronouns.

However, according to the former Miami Heat man, his son knew he was transgender when he was a toddler.

FULL INTERVIEW: NBA superstar @DwyaneWade opens up to @robinroberts about daughter Zaya’s gender identity and why it was important to feature this journey his new @ESPN documentary. https://t.co/ZdCAUU3gAQ pic.twitter.com/Bf6xUJQvcx

“Zaya, early on, knew two things,” Wade told host Robin Roberts. “She knew ‘straight’ and she knew ‘gay.’ But Zaya started doing more research. … She went down the list and said, ‘This is how I identify myself. This is my gender identity.’”

The notion that a 3-year-old toddler can determine their sexuality or even understand the nature of the issue is baffling. A young person’s prefrontal cortex isn’t even fully developed until the age of 25.

In the UK last year it was revealed that five people working at Britain’s only NHS transgender clinic had quit after children as young as three were being through unnecessary gender reassignment treatment.

“Referrals to the clinic risen in recent years, with 94 in 2010, rising to 2,519 by last year, with the youngest patient aged just three,” reported the Daily Mail.

Wade’s announcement that his son was transgender was widely celebrated by the media and celebrities, with only a few lone voices questioning the logic of the situation.

One of those voices was rapper Boosie Badazz, who was accused of going on a “transphobic tirade” after telling Dwyane Wade he shouldn’t allow his son to “cut his dick off.”

“Snowflake has the power to generate individual crystallized snowflake-shaped shurikens.”

If there was ever any doubt that Marvel has totally lost the plot, it goes out of the window with the announcement that a new comic series will focus on a pair of twins who identify as ‘non-binary’ and are named ‘Snowflake’ and ‘Safespace’.

Yes, seriously. Step aside Peter Parker, the Marvel universe no longer has time for your Spidey cisness.

Geeky website Bounding Into Comics reports that Marvel has revived and made-over an old set of characters known as “The Warriors,” labelling them the “New Warriors.”

Creator Daniel Kibblesmith described the series as a “story of teenage rebels.” adding that “a lot of the  names are about teens fighting against labels that are put on them.”

Kibblesmith described how the names ‘Snowflake’ and ‘Safespace’ came about, stating that “It’s this idea that these are terms that get thrown around on the internet that they don’t see as derogatory — to take those words and wear them as badges of honor.”

Kibblesmith noted that “Snowflake” who is “nonbinary and goes by they/them.” has the super power of being able to “generate individual crystallized snowflake-shaped shurikens.” (ninja stars to you and me).

“The connotations of the word snowflake in our culture right now are something fragile. And this is a character who is turning it into something sharp.” the Marvel creator added.

Other characters who are a part of this group include “Trailblazer”, who appears to be nothing more than an obese girl with a ‘magic’ backpack:

Another is “Screentime” an internet obsessed skinny kid who is ‘patched permanently into the world wide web’:

the marvel "New Warriors" are so badly designed i genuinely thought they were parodies of "stuff as many LGBT/minority characters in the main cast as possible" series
FUCKING SNOWFLAKE AND SAFESPACE AAAAAAA pic.twitter.com/RJ4s6L1E25

Marvel has officially turned into a parody of themselves.
Literally naming heroes in their New Warriors comic, 'Snowflake' and 'Safespace'.
They even have stereotypical cringey designs.

Marvel knows comics are circling the drain, so they figured they might as well go all in.🤷🏿‍♂️ pic.twitter.com/sFtjYBfcE9

I’m all for LGBT and minority characters playing major roles in series, don’t get me wrong!
this is just a great example of forced diversity for the sake of faux-inclusiveness

Seriously though… Safespace? How much more absurd can this get?

Marvel fans on Twitter immediately poured scorn all over it:

Hey guys I created the villain of the New Warriors series from Marvel tell me what you think pic.twitter.com/x3n1mARrsW

No, this isn’t a joke. Marvel has unveiled its new generation of superheroes…

Meet Snowflake and Safespace, as @polly_boiko explains, not the 'new warriors' we need…but maybe, the ones we deserve pic.twitter.com/4pNOLOM3xm

Since then, Marvel has set about destroying many of its established characters, or altering their race and sexuality.

The law says it isn’t. 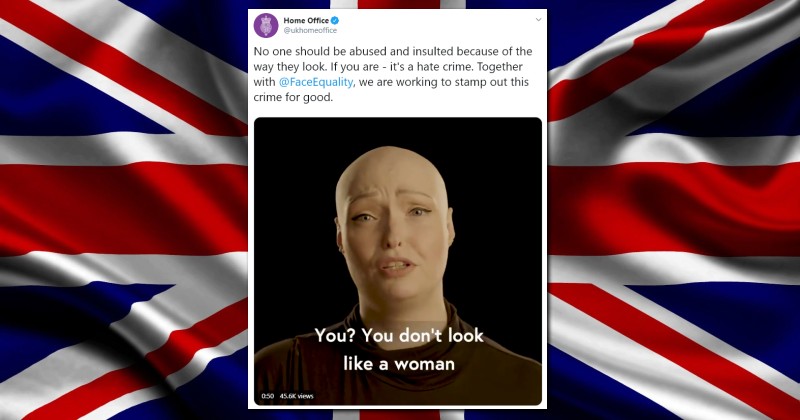 A video published by the UK government Home Office suggests that insulting someone’s appearance now constitutes a “hate crime,” despite this not being the law.

The clip features several people who are facially disfigured, including some with skin conditions and birthmarks. It also features a bald woman who doesn’t appear to have any facial disfigurement.

No one should be abused and insulted because of the way they look. If you are – it's a hate crime. Together with @FaceEquality, we are working to stamp out this crime for good. pic.twitter.com/GiHb9qnHST

“No one should be abused and insulted because of the way they look. If you are – it’s a hate crime,” states the tweet.

While one of the individuals in the video is so severely disfigured that he might be considered disabled, the other people featured are clearly not disabled.

Calling someone “ugly” is not a crime and being ugly is not a disability, so the Home Office is completely inaccurate in claiming insulting someone “because of the way they look” is a hate crime.

The only loophole here is that the UK’s hate crime law is so absurdly vast, so-called hate crimes are investigated when an offense is “perceived by the victim or any other person” to have taken place.

This means incidents that are clearly not hate crimes are investigated and often logged as hate crimes or “hate incidents” anyway.

But thank God that our government is hot on the case of preventing verbal insults.

Video: CBS Argues That Any Term With The Word ‘Black’ In It Is Racist 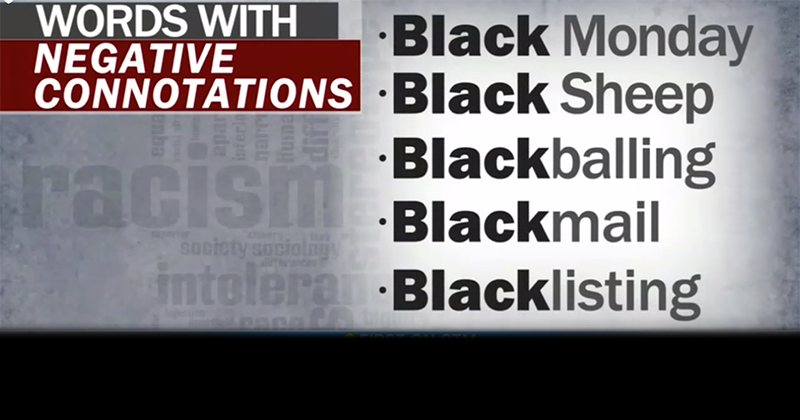 CBS News wants to reeducate America on how racist everyone is by policing their language and making them understand that the country’s founding fathers were really awful bigots.

That’s the overriding message that emerged from a Tuesday segment on This Morning where the anchors and their guests attempted to convince viewers that everyday terms with zero racial context are proof of how “the roots of racism” are deeply embedded in the US.

The segment promoted a new book aimed at children titled ‘Stamped From the Beginning: The Definitive History of Racist Ideas in America’, by CBS News contributor Ibram X. Kendi and co-author Jason Reynolds.

Anchor Tony Dokoupil announced that “Many headlines referred to the stock market plunge yesterday as ‘Black Monday,’ and that is just one of the subtle and not-so-subtle ways that racism has been braided into our everyday culture.”

Co-host Anthony Mason then listed more terms with the word ‘black’ in them, ridiculously suggesting that they are all really racist.

“Terms like ‘Black Monday,’ ‘Black Sheep,’ can be freighted with a negative connotation that sometimes we don’t even realize.” he said, with the other co-host Michelle Miller chiming in that the terms are “baked into the vocabulary.”

“Yeah, and I don’t think we even realize when you have a skin color and regular color and we’re connoting both in a negative fashion. There are relationships between the two and I think we have to break not only the relationship, but those negative connotations.” Kendi suggested.

Miller had earlier argued that children need to be reeducated about how racist the founding fathers were, saying that there are “so many misconceptions and truly lies throughout the history of what children are taught about their history.”

“I hate to put it that directly, but, you know, when you go back and you look at people like a Thomas Jefferson, George Washington, these founding fathers who were so revered, how do you re-teach that?” she worried.

So, just to summarise, even saying the word ‘black’ is now racist, terms that have no racial context, and refer specifically to the colour black are racist, and children need to be re-educated about how racist everyone is.