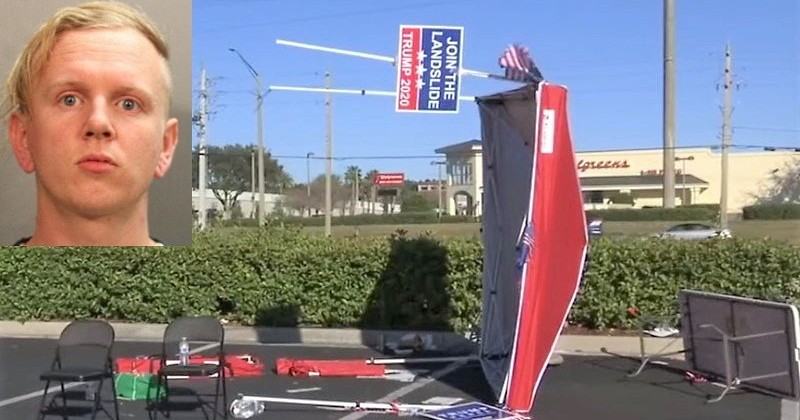 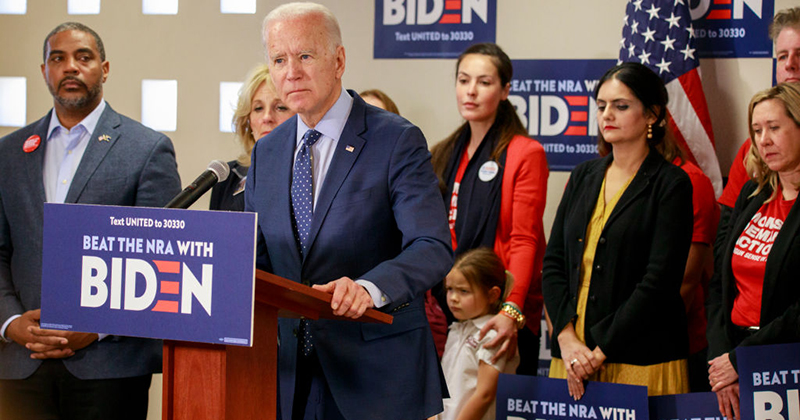 ‘Sleepy’ Joe wants to outlaw “clips that have multiple bullets in them.”

Democratic candidate ‘Sleepy’ Joe Biden raised eyebrows Thursday evening when he told a gathering at a CNN sponsored town hall that if elected he would seek to implement a ban on all semi-automatic firearms, as well as “clips that have multiple bullets in them.”

That description encompasses most guns in America.

Joe Biden ratcheted up the Democrat Party's attacks on the Second Amendment:

Biden: ban "assault weapons" & "get those clips that have multiple bullets in them not for sale, not be able to sell silencers, all those things."

This is a broadside on every law abiding American. pic.twitter.com/NDA0YYVlQv

“I’m going to do everything in my power in office or out of office to get those assault weapons off the street, which I have done once already,” Biden claimed.

“And to get those clips that have multiple bullets in them not for sale, not be able to sell silencers, all those things.” he added.

The comments came following an earlier campaign stop in Las Vegas, the site of the deadliest mass shooting in American history, where Biden surrounded himself with signs that read “Beat the NRA with Biden,” and vowed to “go after” gun manufacturers.

“You know, any one of you and the people behind me should be able to walk into a court of law and demand that gun manufacturers with their enormous profits be held accountable for the carnage they’re responsible for inflicting on society,” Biden said, adding “I promise you, if I’m our next president, they’re going to be held accountable, because I’m coming after them.”

One might think that the clumsy magazine ban description is just Joe being sleepy again, but it’s something he has specifically pledged to do before.

In September, during a campaign stop in Cedar Rapids, Iowa (or Ohio if you’re sleepy) Biden said “The idea that we don’t have elimination of assault-type weapons, magazines that can hold multiple bullets in them, it’s absolutely mindless.”

“It’s no violation of the Second Amendment,” Biden also declared.

Joe Biden makes the most extreme gun-control push of all the 2020 Democrat presidential candidates:

This call from Biden would ban most handguns pic.twitter.com/4iQkalBxVa

Joe Biden goes far-left on guns, says there is “no compromise” on the issue and that it must be his way

Biden told CNN earlier this month that semi-auto firearms should be confiscated from law-abiding Americans pic.twitter.com/5lpJjfkv0M

Would Biden’s extreme ban do anything to prevent mass shootings in America? Not likely according to Johns Hopkins Bloomberg School of Public Health, which released a study this week that “did not find an independent association between assault weapon bans and the incidence of fatal mass shootings after controlling for the effects of bans on large-capacity magazines.”

Go back to bed Sleepy.

“The woman that was in charge of the jury is totally tainted.” 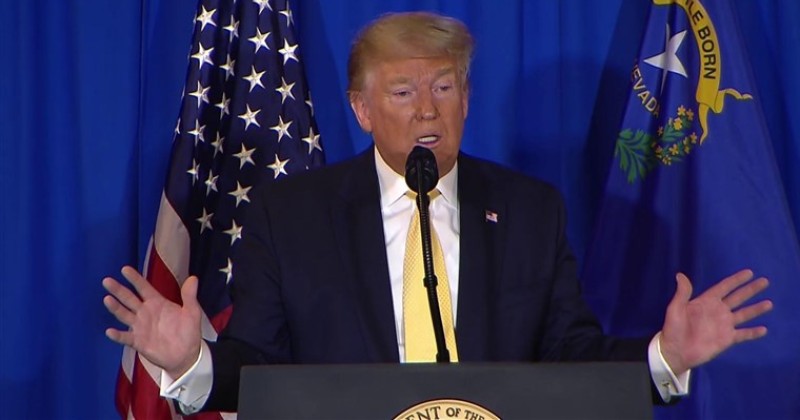 President Trump reacted to the sentencing of Roger Stone by slamming jury forewoman Tomeka Hart as an “anti-Trump activist.”

Stone was sentenced to three and a half years in prison earlier today on seven counts of lying to Congress, obstruction and witness tampering.

However, President Trump asserted that Stone didn’t get a fair trial because the jury was not independent.

“It’s my strong opinion that the forewoman of the jury, the woman that was in charge of the jury is totally tainted…she was a anti-Trump activist,” said Trump.

Trump: The Roger Stone jury forewoman was an anti-Trump activist. The things she said on her social media account were horrible pic.twitter.com/Jj1LqueeQI

“This is a woman who was an anti-Trump person, totally…she had a horrible social media account, the things she said on the account were unbelievable,” he added.

Trump is referring to numerous tweets, many of them compiled by Mike Cernovich, which clearly prove Hart was biased against Trump. 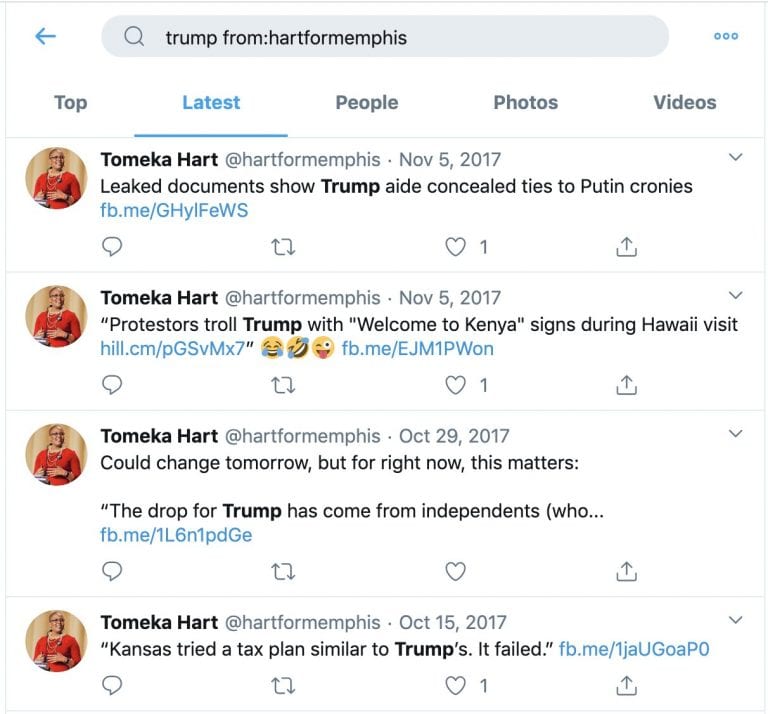 “There are dozens of posts expressing hatred for Trump, which is her right as a citizen. But how did she get on a jury involving Trump’s longtime close friend?” asked Cernovich. “How did a federal court judge ever allow a far left wing activist to sit on a case where a close Trump associate faced trial?”

Despite innumerable anti-Trump social media posts, CNN reported Hart’s claim that “she had remained silent about the case for months out of concern for her safety and “politicizing the matter.”

Trump also said he was following Stone’s trial “very closely,” wanted “to see it play out to its fullest” and that Stone had “a very good chance of exoneration.”

Speculation is rife that Trump will pardon Stone given that he tweeted out a video of Tucker Carlson encouraging him to do precisely that earlier today.

One of them tried to kill Scalise and other Republican Congressmen. 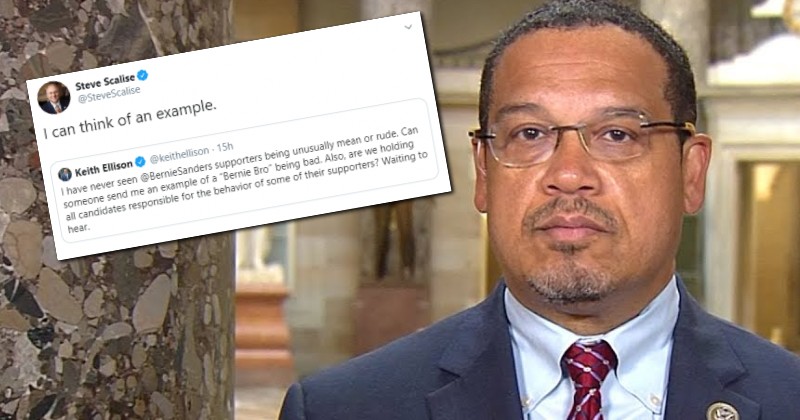 Congressman Steve Scalise responded to Minnesota Attorney General Keith Ellison’s claim that he had never seen a “Bernie Bro being bad” by tweeting, “I can think of an example.”

Ellison tweeted, “I have never seen @BernieSanders supporters being unusually mean or rude. Can someone send me an example of a “Bernie Bro” being bad. Also, are we holding all candidates responsible for the behavior of some of their supporters? Waiting to hear.”

I have never seen @BernieSanders supporters being unusually mean or rude. Can someone send me an example of a “Bernie Bro” being bad. Also, are we holding all candidates responsible for the behavior of some of their supporters? Waiting to hear.

Scalise’s “I can think of an example” response was in reference to the June 2017 incident when Scalise and other Republican lawmakers were targeted by gunman James Hodgkinson, a left-wing activist and vehement Bernie Sanders supporter.

I can think of an example. https://t.co/KwuvyYgyGw

Virginia Attorney General concluded Hodgkinson’s attack was “an act of terrorism…fueled by rage against Republican legislators.”

Scalise’s condition following the shooting was initially described as “critical” after he suffered fractured bones and internal bleeding.

So yes, that could adequately be described as a “Bernie bro being bad.”

Journalist Raheem Kassam also pointed out that Bernie staffers have repeatedly called for their political opponents to be sent to gulags.