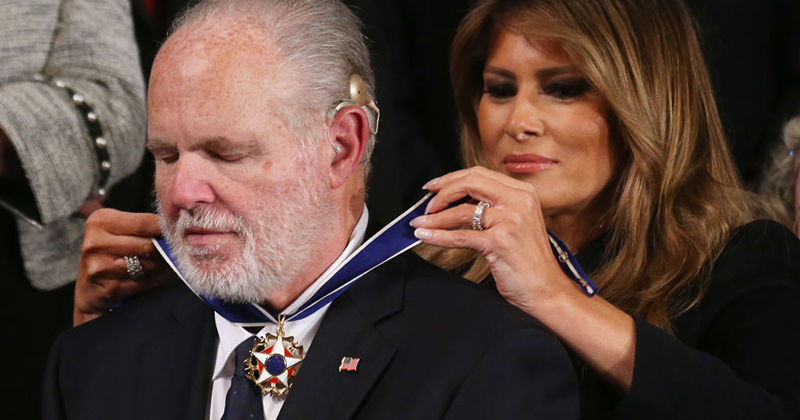 After expressing glee at talk host’s cancer, sickos are furious Limbaugh was awarded at SOTU

Leftists spewed more hate and vitriol toward Rush Limbaugh Tuesday night after President Trump awarded the legendary talk radio host the Presidential Medal of Freedom in recognition of charity work and dedication to the well being of the nation.

Trump instigated the surprise honour for Limbaugh following his revelation that he is battling stage four lung cancer.

Democrats sat silently while the First Lady gave the medal to a clearly emotionally overcome Limbaugh in a scene that for most was positively moving.

"Rush, in recognition of all that you have done for our Nation, the millions of people a day that you speak to and inspire…I am proud to announce tonight that you will be receiving…the Presidential Medal of Freedom." –@realDonaldTrump

Not so much for leftists, however, who having already celebrated the man’s illness, immediately took to their media platforms and social media dens to express their disgust:

Giving Rush Limbaugh the Presidential Medal of Freedom is one of the most disgusting this I’ve ever heard.

Who’s next… Jeffrey Epstein for his humanitarian work with runaway teens?

Rush Limbaugh gets a medal of freedom? Give me a break. Does all the Trumpian morons get medals? What an American disgrace. I won't miss this idiot. pic.twitter.com/GADQk0p1rQ

It just perfectly encapsulates the Trump administration’s massive and absolute incompetence when Rush Limbaugh and a 100-year-old Tuskegee Airman are in the same room and Rush Limbaugh is the one going home with a Presidential Medal of Freedom.

Rush Limbaugh called a Georgetown student a "slut" and a "prostitute" because she advocated for the insurance coverage of birth control. Trump just gave him the Presidential Medal of Freedom.

Rush Limbaugh has spent his entire career spreading hate, bigotry, and baseless conspiracy theories. He does not deserve the Presidential Medal of Freedom. Period. End. Of. Story. #SOTU

In case you were wondering how I'm doing with my nausea, trump just awarded racist Rush Limbaugh the Presidential Medal of Freedom.

And Melania pinned it to him.

I’ve seen Rush Limbaugh support charity. Cancer’s awful. I don’t wish it on anyone. He also has long record of terrible deeds, like calling Sandra Fluke a “slut” and “prostitute”.

Medal of Freedom is highest civilian honor, not to be given out as a TV prop to a political cronie.

I wouldn’t say anything negative about Rush Limbaugh because of his health – may he beat cancer – but to give him the Presidential Medal of Freedom DURING the #SOTU?

Is this the bottom?

Rush Limbaugh is one of the most hateful assholes ever to enter the political arena. Trump just made the Presidential Medal of Freedom fucking worthless.

Says that he, while having cancer, was a "joke," needed an "Opera moment," and was "nauseating" pic.twitter.com/VrsIj1Cmlj

Donald Trump has decided that the key to improving his weak 2020 odds is to give the Presidential Medal of Freedom to flaming piece of dogshit Rush Limbaugh.

No really, this is what Trump is focused on.

Rush Limbaugh, one of America’s most prominent racists, just received the Presidential Medal of Freedom at the #SOTU https://t.co/CynhsLIG21

Wow, racist Rush Limbaugh is getting a Presidential Medal of Freedom.

That, my friends is how White Supremacy works.#SOTU

What did Rush Limbaugh ever do to you? https://t.co/Ojf3s3LkQ1

Remember that time Rush Limabugh called a Georgetown student a slut? Yeah, that guy was just festooned with a medal of freedom by the nation’s chief anti-bullying advocate. https://t.co/A37C4dRPD7

.@jmeacham on Rush Limbaugh receiving the Medal of Freedom: "You have the Medal of Freedom, an emblem of the new frontier, being given to the central architect of a reflexively partisan culture in the midst of a State of the Union that had nothing to do with union." #SOTU pic.twitter.com/kb4yTRh9aM

In a statement issued after Pres. Trump delivered his State of the Union address, Joe Biden criticized the president's decision to award Rush Limbaugh with the Presidential Medal of Freedom. https://t.co/i9NqFsACLE #SOTU pic.twitter.com/xTVbkxmuW5

I formally challenge @CNN and @Acosta to provide a list of statements Rush Limbaugh has made to "disparage African Americans" as @Acosta stated. I have listened to Rush for 30 years. NOT TRUE. It is RACIST for @Acosta to use black people as political fodder.

It's time for CNN to either provide the list or apologize on air for another piece of FAKE NEWS. I believe @BoSnerdley knows Rush better than anyone at CNN. Will CNN have the integrity to put up or shut up? Waiting and watching. https://t.co/4ldB6sgTg6

“Something is WRONG with him. This man IS NOT qualified to be President” 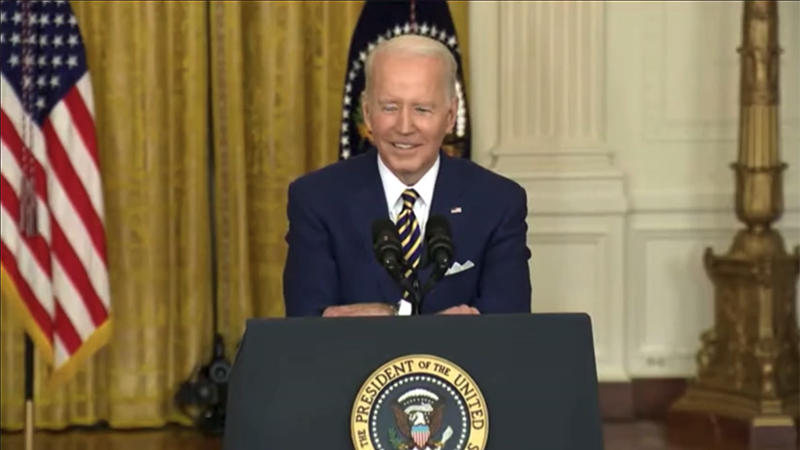 Biden essentially ignored a question from a reporter about why so many Americans believe he is in cognitive decline, replying “I have no idea.”

Just minutes after that Biden displayed more bizarre brain freeze and painful loss of his train of thought.

That display prompted Jackson, the former physician for presidents Obama and Trump, to take to social media:

The doctor recently asserted that that the reason Biden has avoided cognitive exams is because he would have “failed miserably,” and his team “didn’t do it because they know, if they do it, you don’t ask questions that you don’t want the answers to.” 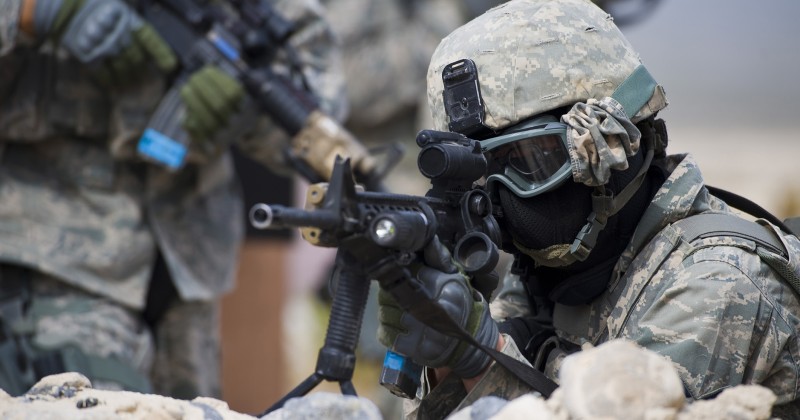 The US Army is set to conduct a “guerrilla warfare exercise” later this month in North Carolina where troops will battle against “freedom fighters.”

The two week “unconventional warfare exercise” will take from from Jan. 22-Feb. 4 on privately owned land in a remote location which remains unknown.

“Called Robin Sage, the exercise serves as a final test for Special Forces Qualification Course training and it places candidates in a politically unstable country known as Pineland,” reports the Charlotte Observer.

Information about the exercise was provided to the media in a bid to avoid civilians confusing the drills with actual terrorist attacks or warfare, which has happened before.

“It will be realistic enough to include the sounds of gunfire (blanks) and flares,” said the center.

“They could tell these soldiers they’re battling the Chinese, Russians, Iranians, North Koreans or other foreign enemies but instead they have them training to kill “freedom fighters” with “Liberty” flags,” writes Menahan.

The exercise will do little to dampen concerns that the Biden administration is launching a de facto ‘domestic war on terror’ targeting patriots and Trump supporters.

Following the January 6 Capitol riot, Democrats ludicrously compared the events to September 11 in an attempt to justify using federal resources that would normally be focused on actual terrorists against American conservatives.

Earlier this month, the Justice Department created a new “specialized unit focused on domestic terrorism” in response to an “elevated” threat from violent extremists in the United States.

However, polls show that Americans are split on who represents the biggest threat, particularly after the Waukesha attack, its subsequent cover up, in addition to the fact that left-wing extremists spent much of 2020 rioting and burning down American cities.

Following the January 6 incident, Army General Mark Milley, the chairman of the Joint Chiefs of Staff, said he wanted to understand “white rage,” although an interest in understanding “black rage” after a sustained period of violent mayhem caused by Black Lives Matter protesters wasn’t seemingly of any importance.