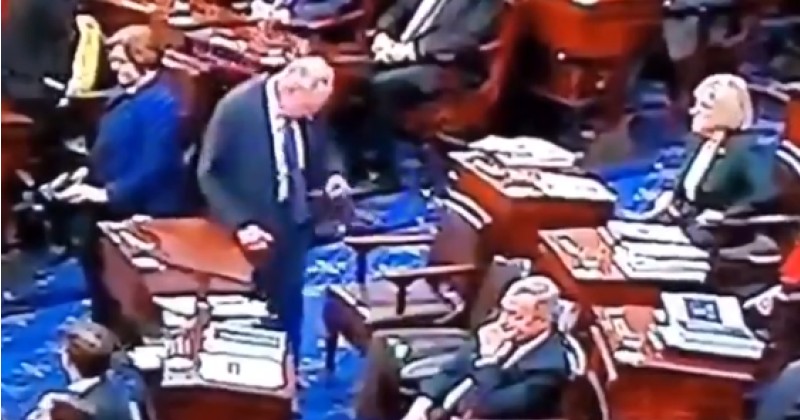 A video appears to show Senator Chuck Schumer interacting with an invisible person, leading some to claim he has mental health issues, while others disputed this explanation.

The clip shows Schumer at the Senate impeachment trial yesterday talking to another Senator before approaching his empty chair.

Schumer then gestures at the empty chair as if he is telling someone to move out of the way.

I have a question, is this Chuck Schumer and did he tell an invisible person to get off his chair?

I zoomed in so you guys could see better. Look at the blonde lady behind him, she looks confused. 🤔 pic.twitter.com/HasrZjFibl

A blonde woman sitting behind Schumer appears to notice the interaction with the invisible person and looks a bit confused.

Another zoomed out version of the same clip appears to show Senator Dianne Feinstein (dressed in red) also reacting with confusion.

Here is the original from ABC guys pic.twitter.com/POx0KuJDqv

However, some respondents on Twitter challenged that explanation, claiming that Schumer was talking to the woman sat behind him.

“Chuck Schumer always look ppl from up his glass(es). So his head always goes down when he talks to ppl. The pics below provide with you this exact perspective,” remarked one.

@Graenni Chuck Schumer always look ppl from up his glass. So his head always goes down when he talks to ppl. The pics below provide with you this exact perspective.

Chuck Schumer wasn't taking to his chair (or someone on it) but to the lady behind him. Take a look: pic.twitter.com/iijVhg0Ttu

“Why did he make the scooch out of the way gesture then?” asked another user.

“Chuck has mental issues if he’s talking to invisible people?” asked another.

Most people agreed that whatever the explanation for the clip, it was a little bizarre.