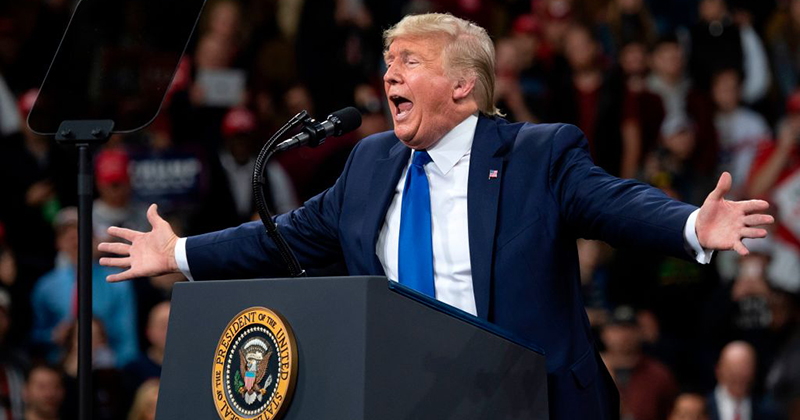 In a development that was mostly completely ignored by the media, President Trump broke a Twitter record for ‘most liked Persian tweet’ with his expression of support for Iranian protesters.

Saeed Ghasseminejad, a senior adviser and financial economist at the Foundation for Defense of Democracies, noted that Trump’s tweet smashed a record and displayed “a strong show of support by Iranians for Trump’s Iran policy”:

This tweet by @realDonaldTrump with more than 100k likes is already the most liked Persian tweet in the history of Twitter. A strong show of support by Iranians for Trump's Iran policy, something the MSM does not and will not report. https://t.co/4tZ0IgDZmx

The President’s message of solidarity with the Iranian people and a further warning to the regime to not kill protesters again were hugely popular.

“To the brave and suffering Iranian people: I have stood with you since the beginning of my presidency and my government will continue to stand with you,” Trump tweeted in Farsi. “We are following your protests closely. Your courage is inspiring.”

Predictably, the Iranian foreign ministry responded with derision, tweeting back “Hands and tongues smeared with threatening, sanctioning and terrorizing the Iranian nation, are not entitled to dishonor the ancient Persian language.”

The Iranian regime has cracked down on protesters, with reports of soldiers and riot police firing into crowds of civilians, despite denials by Tehran police.

This is a brand new chant – never heard before. It’s in response to the caliber of people killed on #UkranianPlaneCrash & the people killed 40 years ago during Iran revolution

“THEY KILLED
OUR GENIUSES
& REPLACED
THEM WITH CLERICS”#IranProtests #Tehran Sunday January 12th pic.twitter.com/P38zjBHu0D

It emerged this week that Trump’s decision to assassinate IRGC Guds Force chief Qasem Soleimani was actually months in the works.

NBC cited  multiple officials who suggested that “The presidential directive in June came with the condition that Trump would have final signoff on any specific operation to kill Soleimani, officials said.”

The president’s message was “that’s only on the table if they hit Americans,” according to a person briefed on the discussion.

Expert: ‘Chinese Regime Is Deeply Racist… This Is Something We Haven’t Seen Since The Third Reich’

Report: Universities refusing to co-operate with investigation into Chinese infiltration. 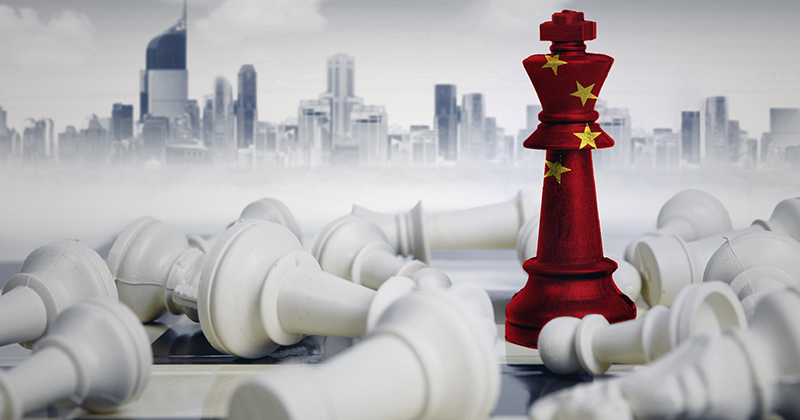 Several universities in the U.S. are refusing to cooperate with federal investigations into alleged infiltration by the Chinese government through bribes and financial kickbacks, according to reports.

College Fix reports that multiple institutions being scrutinised by the Department of Education are refusing to provide internal documents that are thought to contain evidence of undisclosed financial grants from the Chinese government.

The legal representatives of the universities are arguing that they do not have to provide information because of “Freedom of Information Act exemptions and legal privileges,” according to correspondence from the Department of Education, which did not name the institutions that have refused to comply.

Department of Education General Counsel Reed Rubinstein noted that “the evidence suggests massive investments of foreign money have bred dependency and distorted the decision making, mission, and values of too many institutions.”

Rubinstein admitted that the government will not be able to fully release information it does receive from the universities.

“Inappropriate disclosure of confidential information could lead to separation of powers concerns and will certainly impair the factfinding and enforcement work Congress has authorized us to do,” Rubinstein stated.

As we have recently highlighted, many universities throughout America are still allowing what have been described as Chinese propaganda centers to operate on their campuses, despite warnings from intelligence officials that the communist state is using them to infiltrate US society and indoctrinate Americans.

US intelligence agencies have previously labeled the Confucius Institutes as a national security threat, and several universities have since trashed the programs.

An engineering professor at the University of Arkansas was also arrested by the FBI and faces up to 20 years in prison for allegedly hiding funding that he received from the communist Chinese government.

Last week, the FBI issued a PSA warning of the Chinese government’s intention to steal American medical research in its quest to find a cure for COVID-19.

Speaking to Campus Reform, Gordon Chang, an expert on United States-China relations, and author of The Coming China Collapse, noted that “estimates put the annual theft of American intellectual property at somewhere between $150-600 billion a year.”

“Some of that actually takes place on American college campuses. China has bought a number of college professors, a number of them have been fingered by the FBI and they’re pending investigations, and Chinese students have been engaged in activities…for instance, downloading entire databases for China.”  Chang added.

Referring to the Confuscious Institutes, Chang said that they “report in reality to the Communist Party’s United Front Work Department. That means these are attempts to subvert other countries.“

“The U.S. is not permitted to have institutes like this in China. You don’t have a Lincoln Center or Roosevelt Institute… we know that propaganda is absolutely critical to totalitarian regimes.” Chang urged.

“They want to put forth narratives and restrict what is said about China on American campuses.” Chang asserted, adding that “You’ve got to remember that the Chinese regime is deeply racist with its Han nationalist ideology. This is something we haven’t quite seen since The Third Reich.”

“They could have easily stopped the plague”. 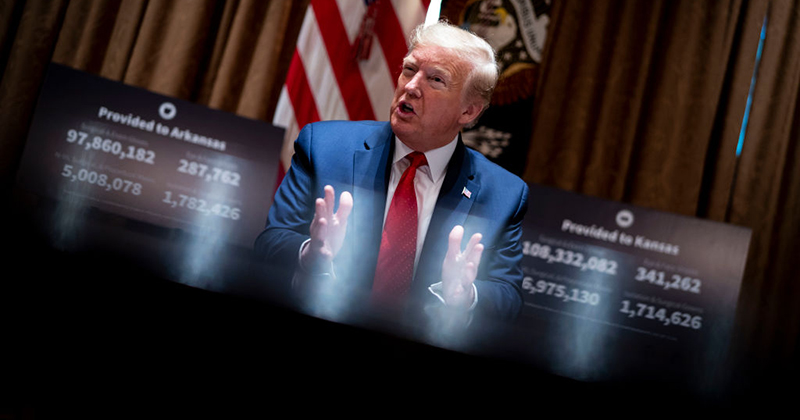 President Trump lambasted China in a late night tweet storm, warning that the communist state is ‘desperate’ for his opponent Joe Biden to win the US election in November.

Trump charged that China continues to attempt to deflect blame away from itself for covering up the pandemic and allowing it to spread.

“Spokesman speaks stupidly on behalf of China, trying desperately to deflect the pain and carnage that their country spread throughout the world.” Trump tweeted.

“Its disinformation and propaganda attack on the United States and Europe is a disgrace,” he urged, adding “It all comes from the top. They could have easily stopped the plague, but they didn’t!”

….It all comes from the top. They could have easily stopped the plague, but they didn’t!

The president continued the rant, warning that if Biden somehow wins the presidency, China will continue to ‘rip off’ Americans.

China is on a massive disinformation campaign because they are desperate to have Sleepy Joe Biden win the presidential race so they can continue to rip-off the United States, as they have done for decades, until I came along!

Earlier in the day, Trump blasted that “it was the ‘incompetence of China’, and nothing else, that did this mass Worldwide killing!”

Some wacko in China just released a statement blaming everybody other than China for the Virus which has now killed hundreds of thousands of people. Please explain to this dope that it was the “incompetence of China”, and nothing else, that did this mass Worldwide killing!

Trump’s tweets come as the world experienced the worst day yet for new coronavirus cases, with 106,000 people newly infected around the world, according to the World Health Orangisation.

China admitted last week that it did order laboratories to destroy samples of the new coronavirus in the early stage of the outbreak.

This combined with a cover up of the facts, the silencing of whistleblowers, the arrest of dissenting doctors, and a complicit WHO led to the spread of the virus worldwide. Research has shown that it could have been contained, lessening the effects by 95%. 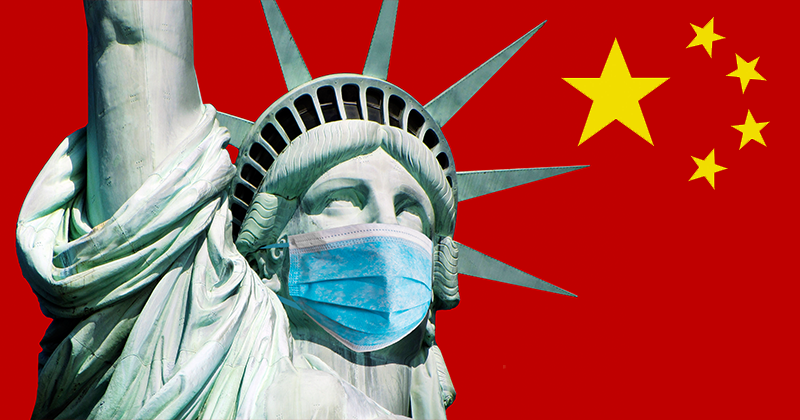 Two Republican Senators have introduced legislation titled the Stop COVID Act, (“China-Originated Viral Infectious Diseases”) to allow US citizens to sue the communist state over the spread of the virus in America.

“This would allow the insertion of COVID-19 as a ‘biological agent,'” to the Foreign Sovereign Immunities Act, said co-author Senator Marsha Blackburn, noting that the law has previously allowed families of the victims of the 9/11 attacks to sue Saudi Arabia over it’s alleged role in the terrorist atrocity.

“What we are doing is giving the individual citizen the right to hold the Chinese Communist Party legally responsible for the act that they have committed,” the Tennessee lawmaker commented in an interview with Cheddar.com.

When asked about the origin of the coronavirus, Blackburn said she would not rule out the Wuhan lab leak theory.

“We’re going to leave it to the intel community and Five Eyes to say exactly what happened here,” Blackburn said, adding “[China] had 3,000 cases on their hands before they said anything about this.”

“They eliminated travel between Wuhan and the rest of China, but they allowed international flights from Wuhan to other parts of the globe,” Blackburn urged, adding “They knew about this for weeks. They didn’t do anything to stop it.”

Several lawsuits have already been filed against China over the pandemic, with the CCP responding by saying ‘they will never happen’, and it is a ‘farce’ to believe that China will ever pay reparations.

“Such lawsuit is nothing short of frivolous litigation which defies the basic theory of the law,” Chinese deputy director of the Foreign Ministry Geng Shuang previously said, adding that “US courts have no jurisdiction over the sovereign actions taken by Chinese governments of all levels in response to the epidemic.”