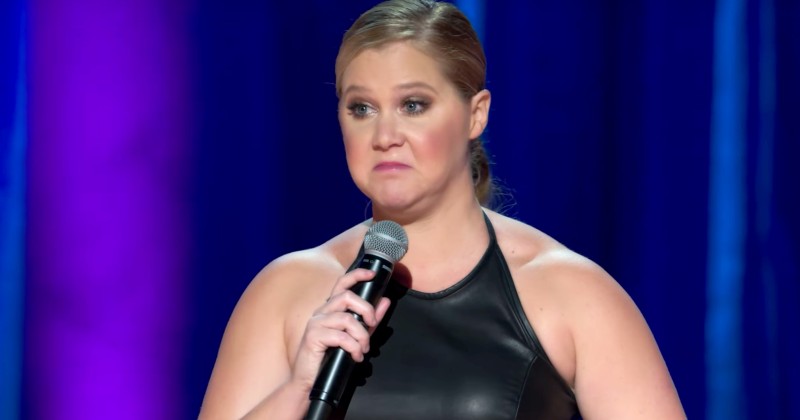 A new study has found that women aren’t as funny as men.

I know, hard to believe.

The study, published by the Journal of Research in Personality, asked subjects to write a funny caption for a cartoon that was then judged by a panel of judges.

Researchers found that 63 per cent of men were deemed to be funnier than the average woman.

The study included over 5500 participants, 67 per cent of whom were women, eliminating and in fact overcompensating for any potential gender bias. It also involved a third-party evaluation of the subjects by someone who was not aware of the subject’s gender.

“It means that to the best of our knowledge, on average, men appear to have higher humor production ability than women,” said Gil Greengross, an evolutionary psychologist at Aberystwyth University in Wales.

She also noted that “a great sense of humor” was one of the signals of mate quality when it comes to females choosing a man.

“Humor is strongly correlated with intelligence, which explains why women value men with a great sense of humor, as intelligence was crucial for survival throughout our evolutionary history when we mostly lived in hunter-gatherer groups,” said Greengross.

No plans to replace it. 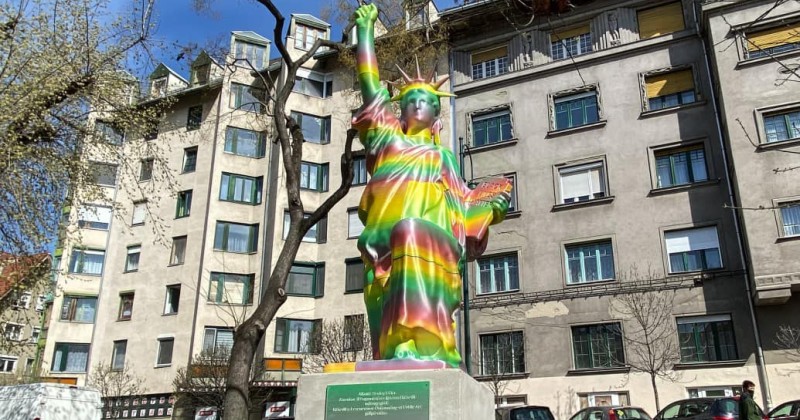 A rainbow-colored statue in honor of Black Lives Matter that was erected in the Hungarian capital of Budapest was vandalized and then demolished within 24 hours.

The monument was a re-creation of the Statue of Liberty with the words ‘Black Lives Matter’ inscribed on the tablet.

The statue was meant to remain in place for two weeks until April 14 but was immediately targeted after it was unveiled in Budapest’s ninth district.

Pro-family activists described the monument as an “anti-European, anti-white, anti-heterosexual, and anti-Christian symbol,” and within 24 hours it was attacked three separate times, doused with paint and finally torn down.

Police later arrested members of the Legion Hungaria organization for their role in defacing the monument.

According to the monument’s creator Péter Szalay, its message was neutral.

“It’s not a thing that speaks against either side. There’s no claim in it that Black Lives Matter or this is pro-homosexual. And there’s no message that the BLM is bad,” he told Daily News Hungary. 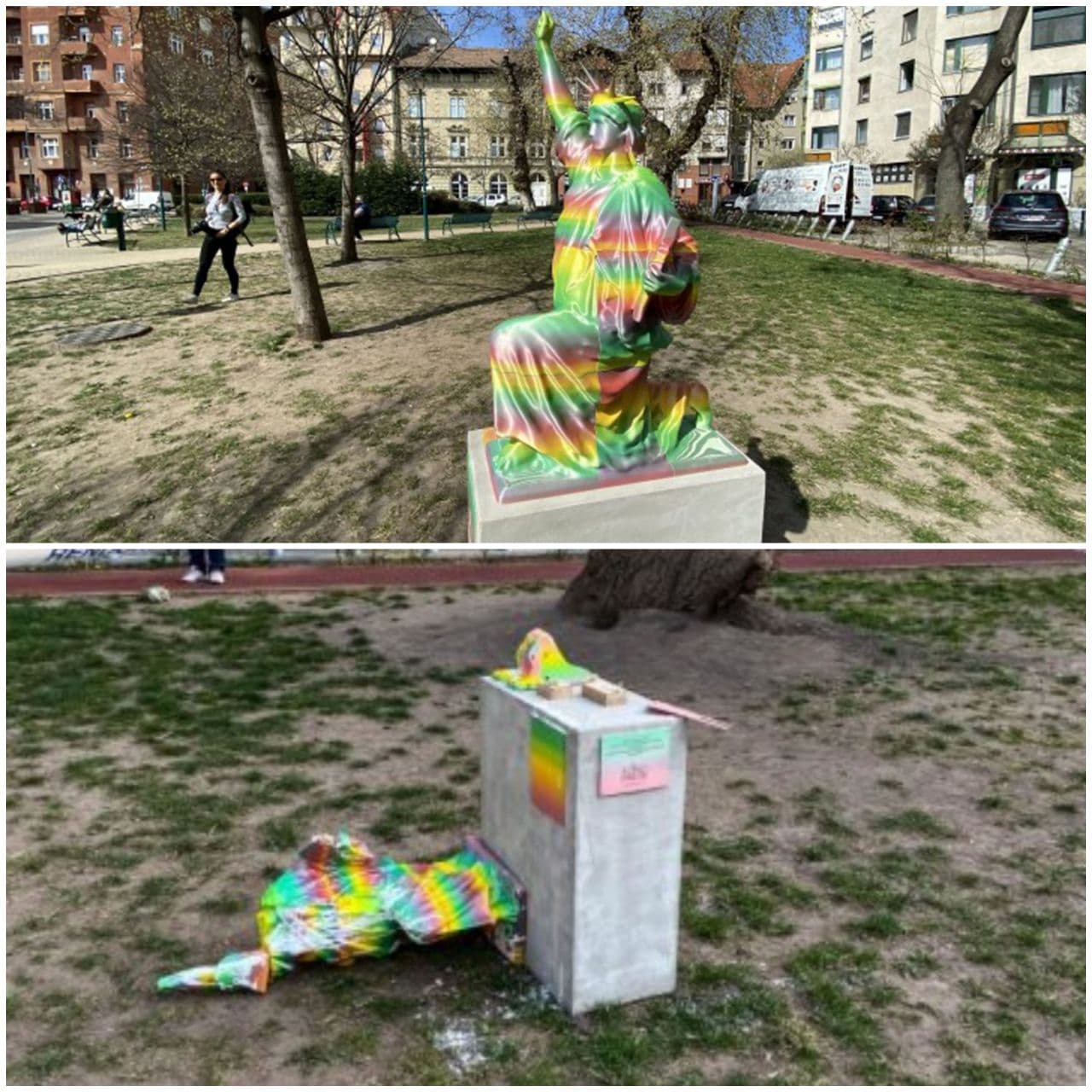 There are no plans to replace the statue.

“Black Lives Matter and its Antifa allies are famous for defacing and tearing down statues of great men who represent the civilization they are committed to destroying, including George Washington, Thomas Jefferson, Abraham Lincoln, Christopher Columbus, and many more,” writes Dave Blount. “In Hungary, BLM reaped as it has sown.”

An LGBT monument that was situated in the Polish capital of Warsaw also suffered a similar fate after it was erected in 2012, having been continually vandalized before being removed permanently in 2015.

Hungary’s populist Prime Minister Viktor Orbán has cultivated support in the staunchly Christian country for his efforts to defend the sanctity of the family in the face of rampant progressivism in other European countries.

Last December, Hungary passed a constitutional amendment affirming the right of children to identify with their birth gender and defining marriage as between a man and a woman.

Asserting that Europe’s native population decline represented a “sickness,” Orbán also oversaw a program to offer significant financial incentives for the country’s own native citizens to have children, handing out €30,600 loans to married couples who have three or more children which are completely forgiven after the birth of the third child.

Asserts that forces within U.S. are trying to impose a “cultural revolution.” 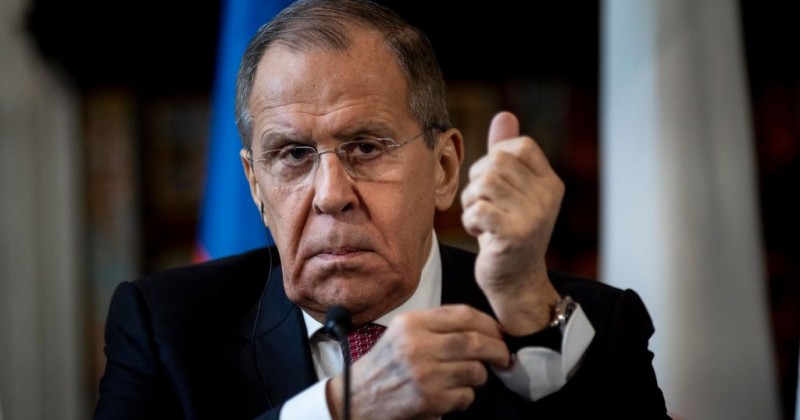 Russian Foreign Minister Sergei Lavrov says there is surging “aggression against white people” in the United States and that it is harming efforts to fight racism.

Lavrov made the comments during an interview with political scientists that was broadcast on national television.

“We were pioneers of the movement promoting equal rights of people of any skin color,” said Lavrov, adding that “everyone wants to get rid of racism.”

However, he emphasized how it was important “not to switch to the other extreme which we saw during the ‘BLM’ (Black Lives Matter) events and the aggression against white people, white U.S. citizens.”

Lavrov also insisted that forces within the U.S. were trying to spread a “cultural revolution” around the world by forcing “diversity” down everyone’s throats.

“Hollywood is now also changing its rules so that everything reflects the diversity of modern society,” he said, labeling it “a form of censorship.”

Russian Foreign Minister Sergei Lavrov on Thursday warned that anti-white racism might be building in the United States and said that political correctness "taken to the extreme" would have lamentable consequences https://t.co/lqyE47BIhE

“I’ve seen Black people play in Shakespeare’s comedies. Only I don’t know when there will be a white Othello,” Lavrov said.

“You see this is absurd. Political correctness taken to the point of absurdity will not end well,” he concluded.

As we previously highlighted, after every mass shooting, journalists and leftists rush to blame white people even before the perpetrator has been identified.

In the case of the Boulder supermarket shooting, this backfired massively after it was revealed that the gunman was an Islamist immigrant from the Middle East.

After the Atlanta shooting attack which targeted massage parlors, the media once again whipped up hysteria over “white supremacy,” despite the fact that authorities found absolutely zero evidence the assault was motivated by race.

This led New York Times contributor Damon Young to assert that “whiteness is a pandemic” and “the only way to stop it is to locate it, isolate it, extract it, and kill it.”

“He was not fired from his job at The Root and the New York Times refused to condemn him — such proclamations are what they pay him for!” writes Chris Menahan.

This narrative, in addition to Critical Race Theory, which teaches that all the United States’ problems are the fault of white people, has clearly created an atmosphere where race hate directed towards white people is not only tolerated, it is openly encouraged.

Another fantastic role model for the kids. 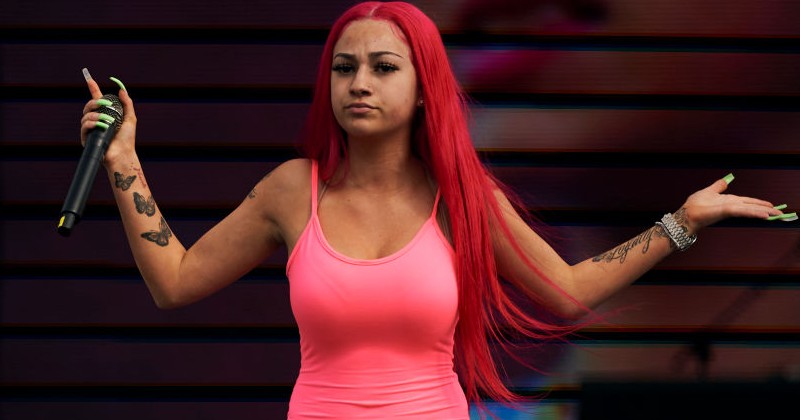 The revelation that ‘Cash Me Outside girl’ made a million dollars in 6 hours after joining OnlyFans days after her 18th birthday underscores once again the predatory nature of how the entertainment industry grooms teenage girls for de facto prostitution.

“The rapper claimed she made six figures in just first six hours on the subscription platform, which allows her to post photos, videos and audio clips with subscribing fans,” reports the Daily Mail.

Danielle Bregoli, who shot to teenage fame after she made a meme out of herself during an appearance on Dr. Phil, literally waited just 3 days after turning 18 on March 26 to launch her OnlyFans account.

In her Instagram posts, Bregoli suggested that she had almost immediately posted images of her naked breasts to her subscribers on OnlyFans, commenting, “We breaking all the rules.”

Except she isn’t breaking any rules, she’s merely whoring herself out for money at the first available opportunity.

OnlyFans grandstands as a tool of “female empowerment,” a way of allowing young women to become independent and wealthy.

In reality, it’s a prostitution platform, with girls pimping themselves out to an army of pathetic pervert simps who pay large monthly subscription fees to create the myth that they are engaged in a private relationship with the recipient.

As Julie Bindel writes, “I have researched and campaigned against the global sex trade for decades and even written a comprehensive book exposing the horrors of commercial sexual exploitation. So I know prostitution when I see it, and no type of sanitised language changes what Only Fans is.”

“The website has a function called “Strip for Tip” and, during a live video, the more money subscribers send the provider, the more clothes she must remove.”

As we highlighted yesterday, Rep. Paul Gosar has written to the U.S. Attorney General demanding an investigation into OnlyFans, accusing the website of facilitating online prostitution in violation of the Mann Act which seeks to prevent “interstate transportation of an individual for an immoral, or an illegal purpose.”

Bregoli’s story mirrors that of other famous child superstars, such as Miley Cyrus and Britney Spears, who are hypersexualized by the industry and the media even before they turn 18 in preparation for their induction into a world of vapid degeneracy.

With roles models like ‘Bhad Barbie’ Bregoli is it any surprise that STDs, female self-harming and suicide are all on the rise as monogamous relationships and marriage are shunned?