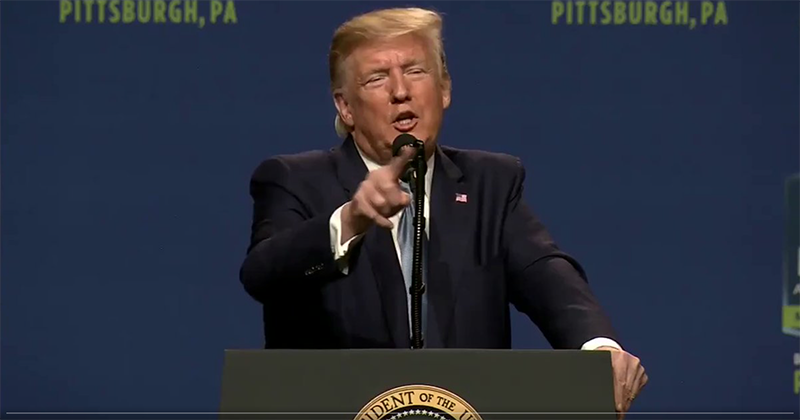 “Don’t hurt them, please, they don’t know who they’re dealing with”

During a speech in Pittsburgh Wednesday, President Trump was interrupted by hecklers and protesters who he promptly told to ‘go home to mom’, while asking security not to hurt them.

Speaking at the Shale Insight Conference in Pittsburgh, Trump paused when a group of rabid protesters got into the room and began yelling.

“They don’t know who they are dealing with,” Trump told the cheering crowd as he began to bang the side of his lectern.

“Don’t hurt them, don’t hurt them, please. They don’t know they’re dealing with very tough people in this room.” The President added, before further berating the protesters.

“Go home to mom. Explain to mom that you tried to take on very powerful people, and many of them physically as well as mentally.” Trump bellowed, adding “It’s not a good thing to do, not in this room, be careful. Make sure you don’t hurt them – please!”

Video captured the protesters being taken out of the building:

Trump was touting his administration’s energy policies during the appearance at at the Marcellus Shale Coalition conference at the David L. Lawrence Convention Center.

Noting that he has cut regulations and bureaucracy to make it easier for the natural gas industry, Trump warned that such progress may be ended if Democrats win the next election.

“What (Democrats) would do to you would be unthinkable,” he said. “What they would do to this incredible profession you are in and this segment of the economy would be terrible.”

Trump said that a return to policies similar to the Obama administration’s would result in “massive layoffs, exploding energy prices and a massive gift to our adversaries.”

“Our vision is 100 percent different from theirs – ours is pro-worker, pro-jobs, pro-family, and 100 percent pro-American.” the President added.

Outside the convention center, Trump supporters and riot police clashed with anti-Trump protesters:

. @PghPolice officers are now lining down the center of Penn Ave to separate protesters and Trump supporters pic.twitter.com/TzEssT5RWv

More police have come in. pic.twitter.com/BGbw8qoc1u

HAPPENING NOW: #Trump supporters are out chanting now with protestors chanting back at them. @PghPolice are now in the street. @KDKA pic.twitter.com/V2WM0BrwIG

#BREAKING: Protesters blocking a street with a banner reading "Our solidarity will defeat White Nationalists" are being arrested in downtown #Pittsburgh ahead of President Trump's visit this afternoon. WATCH LIVE: https://t.co/y2JwYRWk7M pic.twitter.com/DSkseFokS7