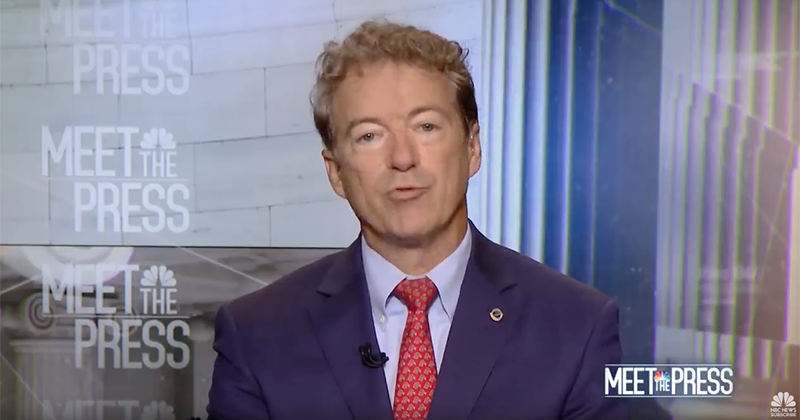 “If you’re going to condemn Trump, you need to condemn the Democratic senators.”

Senator Rand Paul has called for an investigation into Democrat Senators who wrote a letter last year to officials in Ukraine requesting information on Trump campaign officials.

“If anything’s consistent here, both parties have tried to involve themselves in Ukraine,” Paul said on Meet The Press.

“If you’re going to condemn Trump, you need to condemn the Democratic senators,” he added. “It shouldn’t just be one-sided.”

The Democratic Senators, Robert Menendez of New Jersey, Dick Durbin of Illinois, and Patrick Leahy of Vermont, wrote to Ukraine’s prosecutor general in 2018 seeking assistance from the country in the Mueller investigation.

Paul noted that reports suggest the Senators threatened to withhold aid to Ukraine should they not cooperate.

“Everybody is going after President Trump. Someone needs to actually, in an objective way, evaluate a letter from four Democrats that said to Ukraine, if you don’t keep investigating Trump, we will reconsider our bipartisan support for aid.” Paul stated.

“That’s a threat and that’s the same kind of stuff they’re accusing Trump of,” Paul urged.

Paul further suggested that his choice would be not to give Ukraine any aid at all in any case.

“I wouldn’t give them any aid, we don’t have any money, we’re borrowing that money from China to send it to Ukraine,” he insisted.

“I would say ‘we don’t have the money.’ Let’s take care of stuff at home, let’s build roads and bridges in America not over there.” Paul added.

Elsewhere during the interview, Paul voiced his opposition to involving US troops in conflict between Kurds in Syria and Turkey.

“This is a hundred year old war between the Turks and the Kurds. Realize the president is asking is it in our national security interest to somehow figure out how the Kurds can live with the Turks?” Paul declared.

“Turkey was coming in one way or another and 50 soldiers would simply be in the way, and be a tripwire to a much worse outcome. And so I think the president was right in moving 50 soldiers out of the way of an onslaught of tens of thousands of Turkish troops.” Paul also noted.

“Once the Turks said they were coming, it would have been foolish to leave 50 soldiers in the wake of tens of thousands of people coming across the border.” he added.

“The question we have to ask is, and I have to ask, am I going to send the sons and daughters of America and mothers and fathers, and I’m to send them there to die to try to figure out how the Kurds and the Turks can get along?” Paul pondered.