After months and months of criticizing US involvement in ‘forever wars’, Rep. Alexandria Ocasio-Cortez has had a sudden change of mind, tweeting Tuesday that pulling US troops out of Syria could have ‘catastrophic  consequences’.

Trump’s sudden withdrawal from northern Syria & endorsement of Turkey’s actions could have catastrophic consequences & risks laying the ground for immense violence and suffering.

We can pursue a strategy to stop our endless wars without endangering the lives of innocent people. https://t.co/N2YWjEGveX

Of course, her only reason for adopting this position now is that she will oppose literally anything President Trump does. 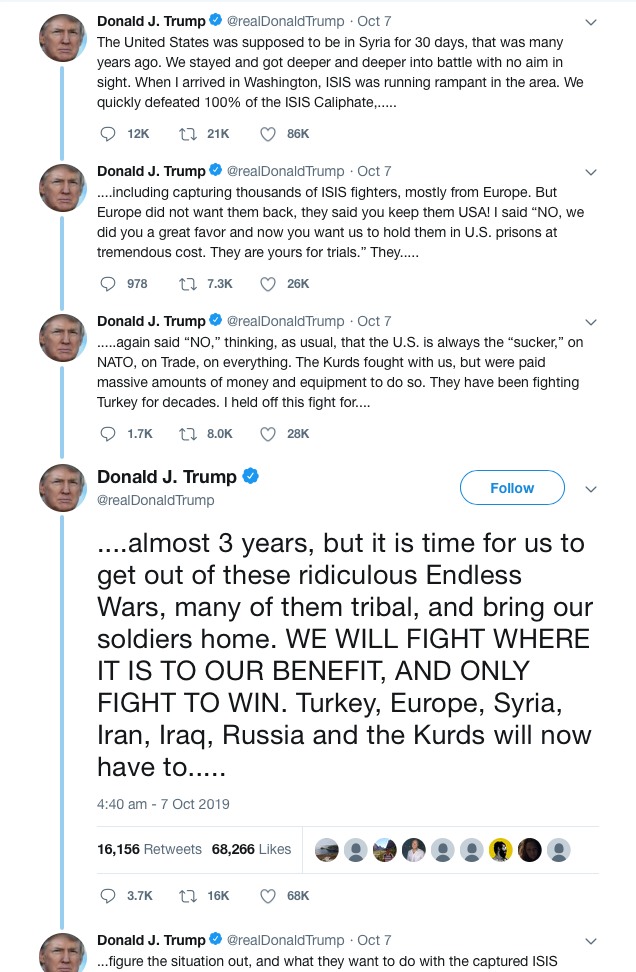 Last year AOC ran for Congress on a promise of working to remove troops from  Syria and elsewhere:

“Alexandria believes that we must end the “forever war” by bringing our troops home, and ending the air strikes that perpetuate the cycle of terrorism throughout the world,” her 2018 campaign website noted.

She has repeatedly criticized ‘endless war’:

Previous gens have used millennials like a credit card: leaving nonstop war, an eroding planet, and education profiteering to fix ourselves.

Now it’s on us. The same officials who got us into this mess aren’t going to get us out.

It’s time to elect a new generation to office. https://t.co/jFthsbFdix

The blueprint for war and regime change is right here.

This is dangerous. Bolton championed wars costing thousands of lost lives – both in American soldiers and innocent people abroad.

The US must transition to humanitarian, diplomacy-led, peace-driven foreign policy. https://t.co/q44f4Nvk6U

Congress MUST repeal the AUMF.

It is incredibly destabilizing legislation that erodes our government’s system of checks and balances, and a persistent threat to peace worldwide.

Here is the profound danger of what we just did in Syria:

A ‘mad king’ President, with majority disapproval of Americans, just decided to bomb a nation without the Constitutional requirement of Congressional approval.

Democrats who take war money passed the laws allowing that.

Sure looks like powerful people are trying to bribe the President into war. https://t.co/e4L4YcrGKp

Paul Ryan’s project to “balance the budget” was always a ruse to explode the deficit with corporate tax cuts + endless war.

I remember a time when it was “unacceptable” to question the Iraq War.

All of Congress was wrong, including both GOP & Dem Party, and led my generation into a disastrous + wrong war that virtually all would come to regret, except for the one member who stood up: Barbara Lee.

‘@tedlieu repeatedly asked [Sec. Pompeo’s advisor] if the Constitution gives Congress the power to declare war. He would not say "yes."

Lieu submitted the Constitution for the record.’

This administration needs to put down its saber and pick up a phone.

Diplomacy is what grants us peace and stability – not war. #NoWarOnIran https://t.co/NZtifF3eki

Common ground I find with (some) GOP:

But now suddenly, AOC is OK with US troops staying in Syria, because… ORANGE MAN BAD.

The response was swift:

You couldn’t even find Syria on a map.

Love how a former bartender is now a foreign policy expert.

Admit it, if Trump were for sending more troops over, you'd come out against that.

I'm no Trump guy, but he's right to start extricating us from these disastrous interventions abroad. My 17-year-old daughter has never known a time when the US wasn't in a war with someone.

You could't find Syria or Turkey on a map of Syria and Turkey.

Trump said breathing was good for ya.

.@AOC in 2018 (still up on her website): "Alexandria believes that we must end the 'forever war' by bringing our troops home." @AOC today: War because Orange Man Bad.https://t.co/udDg2jw1Ri via @BreitbartNews

Meanwhile, some administration officials are already trying to walk back Trump’s withdrawal statements.

An anonymous senior administration official told reporters Monday “the U.S. is not removing its forces from Syria in the face of a Turkish incursion.”

Rather, the president ordered roughly 50 special operations troops in northern Syria to relocate to a different part of the country after he learned that Turkey has planned an offensive against U.S.-backed Kurdish forces in Syria. The official said that offensive had not yet begun.

It seems as if the deep state is once again papering over Trump’s promises, and the media is in lockstep.

How long do people think US troops must remain in Syria? Ten years? Forever? (Are you aware they were there illegally in the first place)? Why is it that the media always ends up defending perpetual war?

Paul: Neocons “Want To Keep Starting Endless Wars In Conflicts That Go Back Hundreds Of Years”