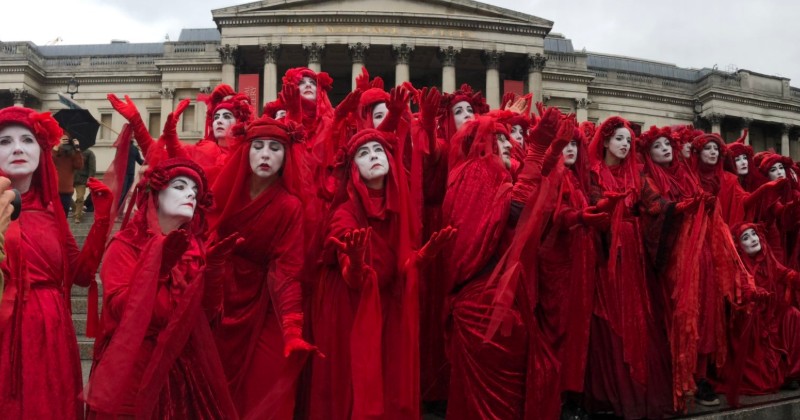 Professor and sociologist Frank Furedi has slammed the Extinction Rebellion climate change protest as “a carnival for middle classes who love to dress up as activists.”

The group has embarked on a 2 week campaign to bring 60 major world cities to a standstill.

In an op-ed, Furedi describes the demonstration as “tens of thousands of adults playing at being children are not so much protesting but putting on a performance of protest.”

“The ease with which Extinction Rebellion has succeeded in occupying the moral high ground has little to do with the quality of their arguments and the strength of their case. In all but name, the political establishments of the western world have given up the attempt to exercise moral authority. The elite no longer upholds the values of their ancestors and is all too aware of its loss of legitimacy. It no longer believes in itself and is evidently prepared to be flagellated by its environmentalist critics. In turn Extinction Rebellion knows that when it instructs its posh friends to jump, their answer is likely to be ‘How High’!

A lot of people on the streets of London and elsewhere are of course really miffed and angry about the way this carnival of reaction has disrupted to their life. In private conversations they murmur and swear at ‘these wastrels’. But as long as the performers enjoy backing of the media, the cultural elites, a significant section of the political establishment, and of course the all-important celebrities, their voice can be safely ignored by the protesters.”

Perhaps someone should have told activists who seemed very keen to display their PVC yoga mats in public that they’re made out of petroleum.

Buying PVC yoga mats made of petroleum to own the climate change deniers is peak #ExtinctionRebellion pic.twitter.com/NOiGGFG5Vb

This protester seemed very keen on hiding his privileged background.

Another privileged posh boy lecturing everyone else how to live their lives while telling the third world they can't develop.

Meanwhile, this dude was literally about to save the Amazon rainforest before being arrested.

Dude was about to save the Amazon and they arrested him. Absolute scenes. pic.twitter.com/L4eMBR6ctP#ExtinctionRebellion

Celebrity hypocrites also jumped on the bandwagon, conveniently forgetting about how they had just appeared in lucrative ad campaigns for airports and airlines.

Fry was paid to front a commercial for Heathrow Airport.

Colman & Chaudry appeared in a recent British Airways ad that plays before all flights.