Device can identify individual faces out of crowds of tens of thousands; Will take mass surveillance to a new level

A new camera with a resolution five times more detailed than the human eye, able to monitor thousands of people in real time and identify individual faces has been unveiled by Chinese scientists, prompting renewed fears about mass surveillance.

The camera system, equipped with state of the art facial recognition utilities, was designed by Fudan University and Changchun Institute of Optics, Fine Mechanics and Physics of the Chinese Academy of Sciences.

The designers claim that the system can detect and identify thousands of human faces or other objects in real time and instantly locate specific targets in environments such as crowded stadiums.

Of course, it would work equally as well at protests.

The designers suggested that police could set up the camera system in the center of Shanghai and monitor the movement of crowds, while cross-checking the images with medical and criminal records.

Li Daguang, a professor at the National Defense University of the People’s Liberation Army in Beijing told the Global Times that the system could “very easily be applied to national defense, military and public security.”

Technology like this in the hands of Communist Chinese authorities, who already operate a citizen social credit system, does not bode well for privacy rights and freedom.

“The Party-state has massive databases of people’s images and the capability to connect them to their identity, so it isn’t inconceivable that technology like this is possible if not now then in the future,” Samantha Hoffman, an analyst at the Australian Strategic Policy Institute noted.

The social credit system, which rewards ‘good behavior’ with incentives and punishes disobedience by restricting and banning people from buying travel tickets, is currently enforced using a vast network of over 200 million surveillance cameras, as well as other tracking tools.

However, the 500 million pixel ‘super camera’ would take surveillance capabilities to a different level.

Scientists noted that the current crop of cameras are able to monitor thousands of people at once, but each face is in the wide shot can only be represented by a few pixels, meaning “you couldn’t clearly see your targeted person at all”.

The data from the video will be “fed into a pool of data that, combined with AI processing, can generate tools for social control, including tools linked to the Social Credit System” said the ASPI’s Hoffman.

Of course, this kind of thing is all fine because it’s all the way away in China, right?

Academic Study Finds Big-Tech Elites Are In Their ‘Own Class’, Different To Rest Of Humanity

They really do think they’re better than you 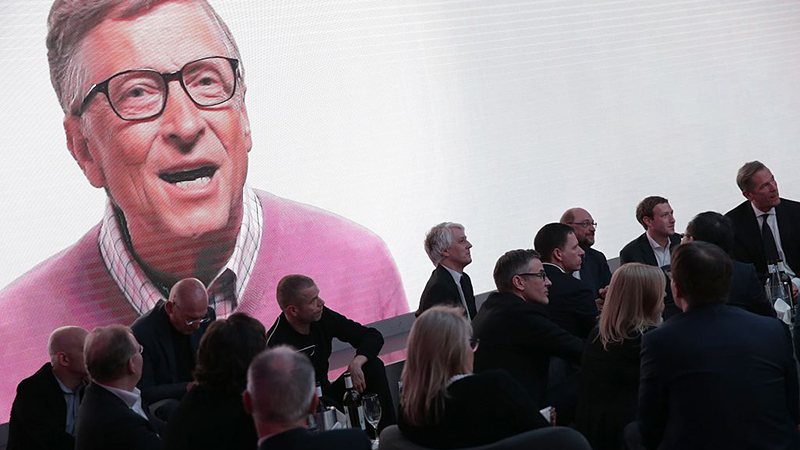 An academic study carried out by researchers in the US and Germany has concluded that big-tech elites are completely different to all other people on the planet, and can be placed in their own class.

“Our research contributes to closing a research gap in societies with rising inequalities,” note the authors of the study from two German universities and the Ralph Bunche Institute for International Studies in New York.

The research centres around analysing language used in close to 50,000 tweets and other online statements by 100 of the richest tech-elites as listed by Forbes.

The researchers conclude that big-tech elites such as Mark Zuckerberg and Bill Gates display a ‘meritocratic’ worldview, meaning they do not see wealth as a source of their influence or success, but rather believe their innate abilities and more altruistic beliefs have enabled them to achieve power.

“We find that the 100 richest members of the tech world reveal distinctive attitudes that set them apart both from the general population and from other wealthy elites,” the study states.

The findings reveal that big-tech elites consistently talk about believing in democracy, being philanthropic, and helping make the world a better place for other people.

“Yet their position in a democratic system is contradictory – as a result of their enormous wealth, they have disproportionate influence over how discretionary income is spent,” the researchers note.

The researchers found that language used by the tech-elites regularly includes words such as ‘merit’, ‘distinct’, ‘excellent’, ‘value’, ‘virtue’, ‘advantage’, ‘superiority’, ‘worth’, ‘perfect’, ‘important’ and ‘significant’.

The researchers also note that “The tech elite may be thought of as a ‘class for itself’ in Marx’s sense – a social group that shares particular views of the world, which in this case means meritocratic, missionary, and inconsistent democratic ideology.”

The researchers noted that the study had limitations, ironically owing to the fact that they were not able to access language used by all the top 100 tech-elites because Twitter is banned in China.

The Twitter accounts they were able to access could also be managed by PR professionals and are obviously public projections of how the tech elites want to be thought of by the public at large, therefore the language used may be ‘strategic’.

Nevertheless, the findings go some way to explaining why big-tech elites are so inclined to censor and de-platform those who hold world views at odds with their own. 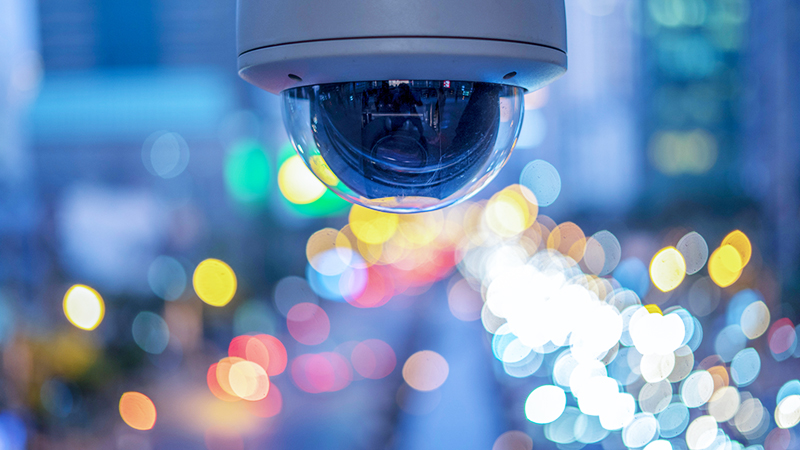 A CNN report published Wednesday details how Venice, Italy has created a disturbing monolithic surveillance grid to track and trace everyone who enters and leaves the city, and claims that this could be the ‘future of tourism’ in a ‘post-COVID world.

They’re watching you, wherever you walk. They know exactly where you pause, when you slow down and speed up, and they count you in and out of the city. What’s more, they’re tracking your phone, so they can tell exactly how many people from your country or region are in which area, at which time. And they’re doing it in a bid to change tourism for the better. Welcome to Venice in a post-Covid world.

The piece then explores how Venice has commandeered a huge warehouse and transformed it into a state of the art technological ‘control room’ to “track tourism” in the city.

The piece details how in the future the city limits could be controlled electronically, and visitors could be charged for access, but the most disturbing aspect is the fact that a Chi-com like surveillance mini state already exists in Venice.

Everything is being recorded at all times, and can be replayed, effectively giving officials a “time machine” that they can use to look back.

The report notes that “The system not only counts visitors in the vicinity of cameras posted around the city, but it also, in conjunction with TIM (Telecom Italia, Italy’s largest telecommunications provider), crunches who they are and where they come from.”

They know this by having access to cell phone data. Simple. But don’t worry because no ‘personal details’ can be accessed, the report claims.

Authorities know exactly which streets people are walking down, how fast they are moving, and whether they should be there or not, owing to COVID restrictions.

Venice’s creeping surveillance state started as a way of ‘protecting’ the city from damage and overcrowding. However, as the CNN piece clearly demonstrates, the architecture that already exists (and it exists across the globe) could easily be applied more aggressively with COVID justification.

Obviously, this is just the tip of the iceberg, in terms of the ‘new normal’ world.

With standardised and globally implemented vaccine passports being heavily touted as the future of travel, and other technology being developed at a rapid rate to allow the enforcement of social distancing and any other restrictions the powers that be require, it is not difficult to imagine where this is all heading.

As we highlighted back in October, Hitachi has developed similar technology, which includes cartoon fish swimming around inside the bubble. When the person violates social distancing, the fish escape.

Describes big tech as the “single greatest threat” to “free and fair elections.” 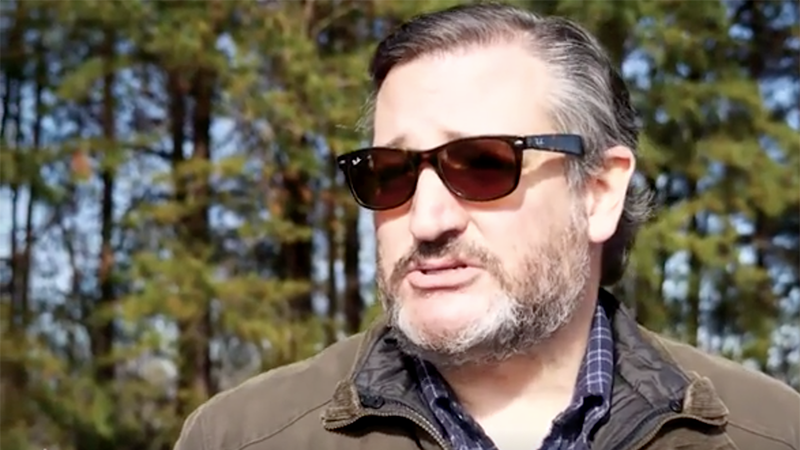 Senator Ted Cruz has continued his campaign against the unregulated expansion of Big Tech by labelling Google ‘the most dangerous company’ on the planet.

Cruz made the comments to reporters Saturday at a campaign event for the Georgia Senate runoff.

Cruz referred to the 2016 election where “Google, through manipulated search outcomes, shifted over 2.6 million votes in 2016 to the Democrats.”

Cruz noted that psychologist Dr. Robert Epstein, who testified before Cruz’s Judiciary Subcommittee on the Constitution “is not a Republican. He is a liberal Democrat who voted for Hillary Clinton but is outraged to see that kind of abuse of power. Google is clearly the most dangerous.”

“We just recently had a hearing where Jack Dorsey testified with a beard that looked like he had crawled out from under a bridge,” Cruz noted.

During that hearing, Cruz asked Dorsey if he believes Twitter has the ability to influence election outcomes, to which Dorsey replied “no”… an answer Cruz described as “absurd.”

“If you don’t think you have the power to influence elections, why do you block anything?” Cruz countered, forcing Dorsey to admit that “more accountability is needed.”

Speaking Saturday, Cruz urged “Look, Twitter brazenly censored the New York Post when it ran stories about Hunter Biden and Joe Biden’s corruption concerning China, concerning Ukraine and Russia, and they just silenced it. Not only did they prevent you and I from circulating those stories, for two weeks, they banned the New York Post.”

Indeed, the company did more than that, they even blocked users from tweeting out the link to the Post story.

“The New York Post is not some fly-by-night organization. It is the newspaper with the fourth-highest circulation in the country. It was founded by Alexander freakin’ Hamilton,” Cruz urged.

Cruz added that Facebook CEO Mark Zuckerberg has “benefited because Twitter and Google are so rotten that even though Facebook’s pretty bad, just saying free speech is important makes him appear markedly better than his rivals, but all three are very serious concerns.”

The Senate voted last week to pass the National Defense Authorization Act without the repeal of Section 230 that President Trump had requested: