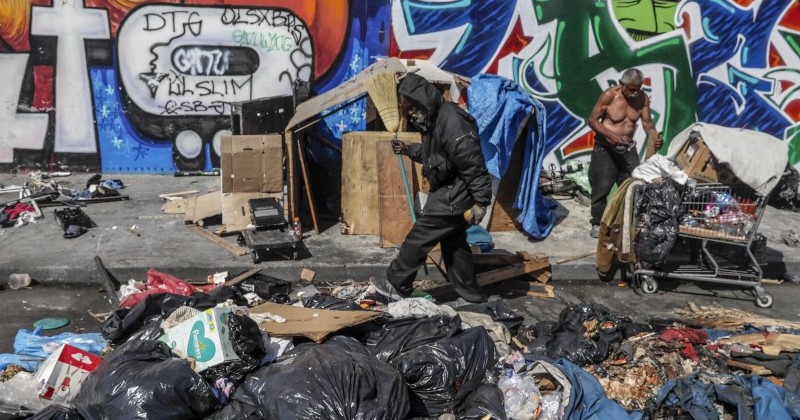 With typhoid fever and even the return of the bubonic plague already big concerns, increasing homelessness in Los Angeles could also spark an increase in leprosy.

According to a new study, more leprosy cases are starting to emerge in Los Angeles County, with Dr. Maria Teresa Ochoa of the University of Southern California urging the public to “fight the stigma.”

Leprosy, which is spread through the air but must involve close contact, can cause permanent blindness, severe damage to the body’s skin, nerves, and mucous membranes, as well as deformities.

Although victims can make full recoveries if they receive early diagnoses, most of Los Angeles’ homeless population who are at risk will not get swift treatment.

“As leprosy has been a neglected disease with a high potential to cause deformities, especially when it is not treated properly, I would like to reinforce the need for early identification of cases in the community with the adoption of active case search and screening of household and social contacts from all index cases,” Dr. Victor S. Santos told Reuters.

1.5 per cent of rats in L.A. now carry bubonic plague. If that figures hits 2 per cent, the medieval disease will start jumping to humans.

As we document in the video below, L.A.’s 60,000 homeless population, vast amounts of uncollected trash and 12 million rats have all combined to make the city increasingly resemble a third world hellscape.

“It gives him a feeling of security” 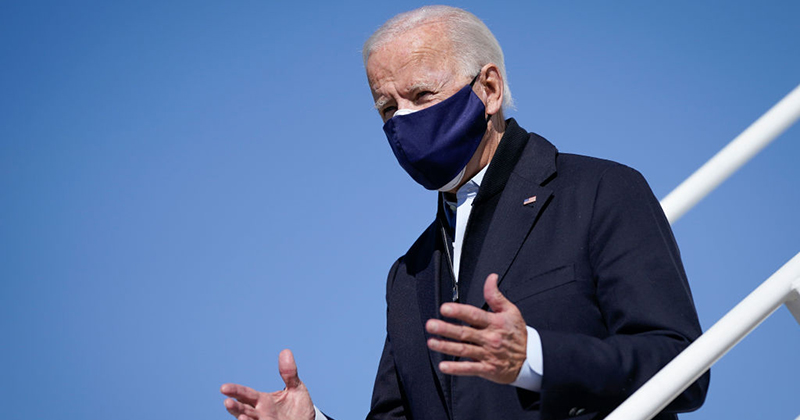 Democratic candidate Joe Biden was pictured wearing two face masks at a campaign stop in North Carolina over the weekend, reenforcing recent criticisms made by President Trump that his rival uses them as a safety blanket.

Biden was pictured wearing a reusable a cloth mask on top of a regular surgical mask:

For Joe Biden, two face masks are better than one in the era of COVID-19 https://t.co/Wn6UNNfXj7 via @YahooNews

President Trump commented at a rally last month that he doubts anyone knows “a man that likes a mask as much” as Biden.

“It gives him a feeling of security,” the president said adding “If I was a psychiatrist, I’d say this guy has some big issues.”

During the first debate, Trump again raised the mask issue, saying “I don’t wear a mask like him. Every time you see him, he’s got a mask. He could be speaking 200 feet away from him and he shows up with the biggest mask I’ve ever seen.”

In another speech, Trump claimed that Biden doesn’t care about Americans, only about himself, and avoiding the virus.

Trump told the crowd “By the way, did you see one of the last big rallies he had? A reporter came up to him to ask him a question, he said, ‘No, no, no. Stand back, put on your mask, put on a mask. Have you been tested? I’m way far away from those other people.’ That’s what he said, ‘I’m going to be okay.’ He’s not worried about you. He’s not worried about the people out there.”

I hope all you Lefty mask wearers noticed the "Head Lefty" Joe Biden is now wearing TWO MASKS just to out-do your Lefty-ness. You all better start wearing two masks too, or else the Leftard mob will expel you as "not caring".https://t.co/cmc6doVSzm

What’s left of that brain cannot withstand two masks worth of oxygen deprivation!!! Biden goes to church before heading to NC with Hunter's daughter
https://t.co/TVNwCJv7gT

My new husband and I voted for Biden two days after our wedding! Our masks were quite a hit with the volunteers at the registrar’s office 😂#newlyweds #gotv pic.twitter.com/y6qgaoohkY

Or is it just a way of avoiding answering awkward questions?

'I know you'd ask it,' Biden replied heatedly, wearing two masks. 'I have no response, it's … https://t.co/62guPZ9x6X via @MailOnline

He wore two masks which defines 👉tragedy and comedy. Very fitting for Biden. 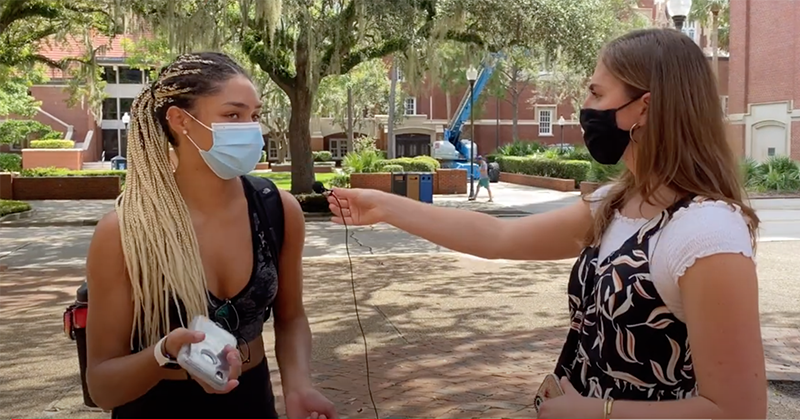 With the latest trend being to root out and cancel anything and everything as racist, Campus Reform went to the University of Florida to see if students know about something that really has been institutionally racist since its inception, Planned Parenthood.

It is well documented that the founder of Planned Parenthood, Margaret Sanger, was a virulent racist and eugenicist. In a 1919 letter titled, “Birth Control and Racial Betterment,” Sanger wrote how selective breeding could “assist the race toward the elimination of the unfit.”

In an essay from 1921, titled, “The Eugenic Value of Birth Control,” Sanger also discussed how eugenics can solve “racial” problems.

“Today eugenics is suggested by the most diverse minds as the most adequate and thorough avenue in the solution of racial, political and social problems,” Sanger wrote.

As noted in Alex Jones’ 2007 documentary, “Endgame: Blueprint for Global Enslavement,” Sanger also recommended in a letter to fellow eugenicist Clarence J. Gamble discussing the “Negro Project,” that hiring a “negro physician” could be helpful in convincing “colored negroes” in the South about the value of eugenics.

“We do not want word to go out that we want to exterminate the Negro population and the minister is the man who can straighten out that idea if it ever occurs to any of their more rebellious members,” Sanger wrote.

Sanger’s legacy is so toxic that for several years Planned Parenthood has been distancing itself from her, and slowly erasing her from its history.

With all of this in mind, Campus Reform asked students if they support removing America’s “racist” institutions, statues, and figures, before hitting them with these facts about Planned Parenthood:

“America has like a really toxic past and we shouldn’t be like memorializing that,” one student commented, with another adding “I think it’s good. I think as a country we need to progress past like idolizing racist figures.”

“People as individuals need to really decide for themselves if they want to support it or not. But I know I definitely wouldn’t if the f***ing leader said that,” another student said.

Others were not so sure, however.

One student was asked to guess who said the quote about ‘exterminating the Negro population’ and ludicrously suggested that President Trump was a prime candidate.

A further student admitted she was “actually surprised,” because “Planned Parenthood is usually a very liberal and inclusive organization.”

“I still think Planned Parenthood is important and needs to like continue on,” another student concluded.

So, to conclude, for some young people as long as an organisation is doing something ‘liberal and inclusive’, like exterminating babies, it shouldn’t matter if its founder loved Hitler. Those Paw Patrol cartoons must go, however.

Disease kingpin slams Americans who don’t trust him as having “anti-science bias”. 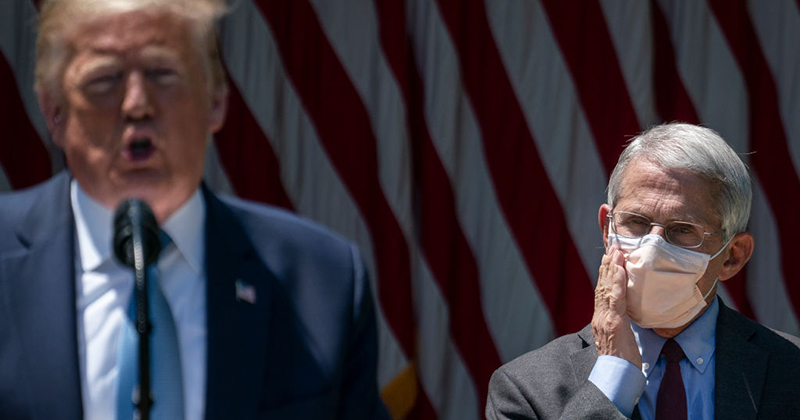 Dr. Anthony Fauci, the polarising director of the National Institute of Allergy and Infectious Diseases, slammed everyday Americans for refusing to go along with ‘authority’ on medical matters, and accused people of ‘amazing denial’ when it comes to ‘truth’.

Speaking on a podcast called Learning Curve, produced by the Department of Health and Human Services (HHS), Fauci charged that “unfortunately, there is a combination of an anti-science bias that people are — for reasons that sometimes are, you know, inconceivable and not understandable — they just don’t believe science and they don’t believe authority.”

“So when they see someone up in the White House, which has an air of authority to it, who’s talking about science, that there are some people who just don’t believe that — and that’s unfortunate because, you know, science is truth,” Fauci asserted.

“It’s amazing sometimes the denial there is, it’s the same thing that gets people who are anti-vaxxers, who don’t want people to get vaccinated, even though the data clearly indicate the safety of vaccines,” Fauci proclaimed, adding “That’s really a problem.”

Perhaps the real reason Americans don’t trust Fauci is that he’s consistently flip flopped and contradicted himself on ‘the truth’ for months.

The man also exudes authoritarianism, and clearly has a problem with anyone who questions his superiority.

Fauci also has a long history of being the front man for a network of powerful Big Pharma and Big Medicine interests, pushing vaccines and medicines in a clear conflict of interest.