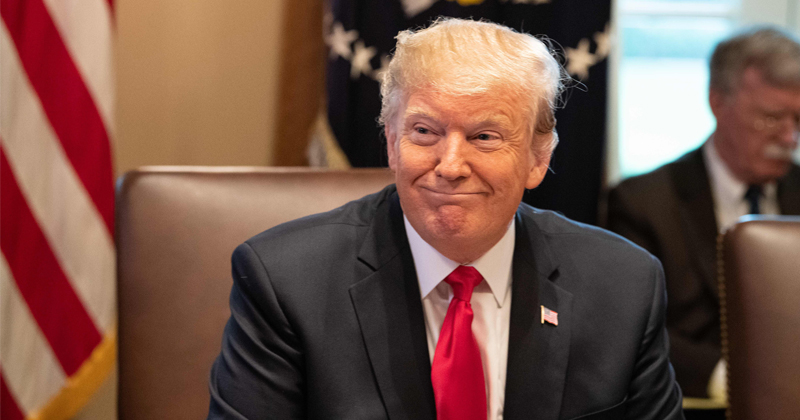 President Trump is cracking down on fake news put out by MSNBC, with his attorneys demanding a retraction regarding a story claiming that Trump had “Russian oligarchs” as co-signers on loans.

The claims were broadcast by MSNBC host Lawrence O’Donnell on Tuesday evening.

If true, that explains every kind word Trump has ever said about Russia and Putin. @TheLastWord 10pm

O’Donnell said that he had “a single source close to Deutsche Bank” to back up the claims that Trump was in bed with “Russian billionaires close to Vladimir Putin.”

It’s the kind of horse crap that MSNBC has been putting out for literally years now.

The claims were immediately called out:

I understand why reporters often rely on anonymous sources, and so long as they have multiple sources with direct knowledge/evidence of an event, its fair game IMO.

But single sourcing "scoops" with no evidence/direct knowledge is indefensible & should be rejected by everyone. https://t.co/qBjrso3072

Deutsche Bank is declining to comment on Lawrence O’Donnell’s reporting that Russian oligarch’s co-signed Trump’s loans. The information came from a single source who has not seen the bank records. NBC has not seen those records and has not yet been able to verify the reporting.

Press Secretary Stephanie Grisham said that “Instead of applying ethics and standards to their reporting, journalists and left-wing outlets have weaponized the media, using it to attack and harass people with little to no regard for the truth.”

“We write concerning the false and defamatory statements published by Lawrence O’Donnell and NBC Universal (‘NBCU’) (collectively, ‘you’ and ‘your’) about Mr. Trump and Trump Org. in an episode of the program, The Last Word with Lawrence O’Donnell, which was broadcasted on or about August 27, 2019 (the ‘Program’), and also published by Mr. O’Donnell and NBCU in a tweet posted on that same date (the ‘Tweet’). The Program and Tweet make the false and defamatory statements that ‘Russian oligarchs’ cosigned loans provided to Mr. Trump by Deutsche Bank, and described these ‘co-signers’ as ‘Russian billionaires close to Vladimir Putin.’”

“These statements are false and defamatory, and extremely damaging,” the president’s lawyer added.

“The only borrowers under these loans are Trump entities, and Mr. Trump is the only guarantor. Numerous documents for each of these loans are also recorded, publicly available and searchable online. Thus, actual malice can easily be proven based on your reckless disregard of the truth and unreasonable reliance on an alleged ‘source’ who you will not even identify in your story and likely is seeking to mislead you and the public for political reasons or other ulterior motives.”

“Demand is hereby made that Mr. O’Donnell and NBCU immediately and prominently retract, correct and apologize for the aforementioned false and defamatory statements,” Harder’s letter continues.

“Failure to do so will leave my clients with no alternative but to consider their legal options which could include immediate legal proceedings against Mr. O’Donnell and NBCU,” Harder added. “Should that occur, my clients would pursue all available causes of action and seek all available damages and other legal remedies to the maximum extent permitted by law.”

Last night I made an error in judgment by reporting an item about the president’s finances that didn’t go through our rigorous verification and standards process. I shouldn’t have reported it and I was wrong to discuss it on the air. I will address the issue on my show tonight.

If every single fake story was shut down in this way, MSNBC wouldn’t have any content to broadcast.

There has never been a time in the history of our Country that the Media was so Fraudulent, Fake, or Corrupt! When the “Age of Trump” is looked back on many years from now, I only hope that a big part of my legacy will be the exposing of massive dishonesty in the Fake News!

TOO LATE: Trump Tells MSNBC Weasel O’Donnell To Lawyer Up, Despite ‘Apology’

The Truth About Greta