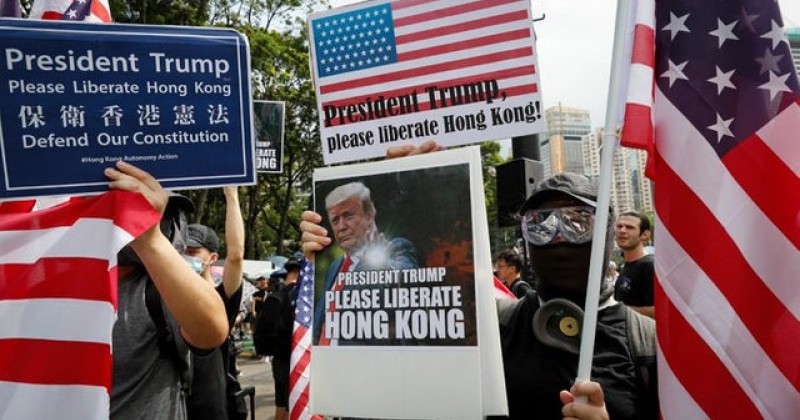 Demonstrators have been flying British flags and American flags for weeks, but their latest icon appears to be Pepe the frog, a meme associated with the far-right and more moderate Trump supporters. 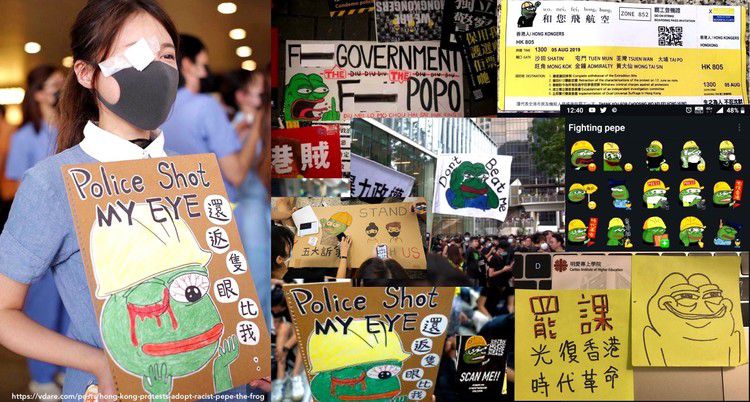 Trump has tried to stay neutral on the whole issue, asking that the crisis be de-escalated and that both sides come to an agreement without further violence.

While protesters assert that their demonstration against further encroachment on the region by Beijing is organic, China claims that the U.S. is covertly encouraging a color revolution.

As we previously reported, tens of thousands of China’s People’s Armed Police (PAP) troops are massing inside a sports stadium just a few kilometers away from Hong Kong.

Chaos in Hong Kong As Protesters Rally Against Surveillance 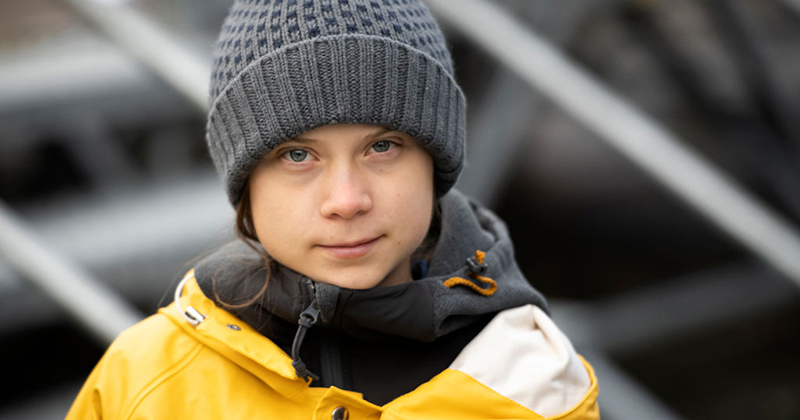 17-year-old Climate alarmist Greta Thunburg has been nominated for a Nobel Peace Prize, prompting the internet to attempt to re-balance the scales of sanity back from bat-shit-crazy.

Thunberg has been nominated for the 2020 prize by two leftist Swedish lawmakers, Jens Holm and Hakan Svenneling, according to reports.

The pair argued that Greta “has worked hard to make politicians open their eyes to the climate crisis.” and that her efforts have contributed to “reducing our emissions and complying with the Paris Agreement.”

The liberal politicians claim that this is “therefore also an act of making peace.”

Greta’s antics of skipping school to fly and motor boat all over the planet lecturing everyone about carbon emissions, while cameras follow her every move, and her dad writes her social media posts, earned her a TIME Magazine person of the year award in 2019.

Thunberg never made it over to China or India, however, where the world’s worst environmental impact is emanating from. instead, she opted to scowl at President Trump and threatened to put Western leaders “against the wall”.

President Trump: "You have another continent where the fumes are rising at levels that you can't believe. I mean, I think Greta ought to focus on those places." pic.twitter.com/oaUc3dY4bx

… improvise speeches in a second language.
But of course I apologise if anyone misunderstood this. I can not enough express the fact that I – as well as the entire school strike movement- are against any possible form of violence. It goes without saying but I say it anyway.

So ridiculous. Greta must work on her Anger Management problem, then go to a good old fashioned movie with a friend! Chill Greta, Chill! https://t.co/M8ZtS8okzE

The news of the Nobel nomination for Greta, was met with… shall we say ‘skepticism’:

If white privileged existed Greta would be a prime example. Literally just skips school and shitposts at a politician or two gets a time magazine cover and a Nobel prize

Greta Thunberg getting a nomination for a Nobel Prize is like me getting a raise at work for my impression of Sméagol from the Lord of the Rings. pic.twitter.com/TpGTEAEZ3I

She has done nothing for peace, actually her hatred and disdain for people who do not agree with her was the opposite of bringing peace, it actually brought hatred and violence. @NobelPrize #peace #ClimateChangeHoax
Thunberg Nominated https://t.co/BzhjxXKCti via @BreitbartNews

A Nobel prize ? For sending young Children to the brink of mental Breakdown. Believing the end is Neigh . Find a better way Greta 😞

Greta Thunberg has been nominated for the 2020 Nobel Peace Prize, More Proof that the Nobel Prize has no substance or merit and is full of absolute SHIT…

Greta nominated for a nobel prize, for missing school, jet setting around the world, speaking from a script to politicians and celebrities says everything about the world.

No substance. All propoganda fuelled sensationalism.

North Korea. Iran. World not in a nuclear holocaust: thank you @realDonaldTrump. That Obama and Greta are up there, Nobel Prize meaningless. I give my own personal Nobel to President Trump. https://t.co/rsI460Bd5O

And they will probably give it to her as well, biased as they are. To a silly little exploited schoolgirl. How nice.

You have got to be kidding. So @georgesoros pays an activist father millions so he can prostitute his own daughter @GretaThunberg for #ClimateChange – @NobelPrize is no longer a distinguished and respected honor. It has sold out to the highest bidder.

Greta Thunberg is the front-runner for the Nobel Peace Prize.

Barack Obama won it during his first year in office for absolutely no apparent reason.

At this point, it’s just a popularity contest without meaning.

I want her to get it just for those 10 minutes of her shouting “how dare you?!?” at all those state officials, and her disgust at their “fairytales of endless economic growth.”

Give her the Nobel just for that.

And then there’s this…

I've been saying this since I saw Greta Thunberg splayed all over tv. Thunberg is a moron but that whiteness is getting her nods for a Nobel prize. Then they claim she's disabled to play the victim card as is always done for white women 🤮🤮🤮 fck Greta Thunberg and all her ilk.. 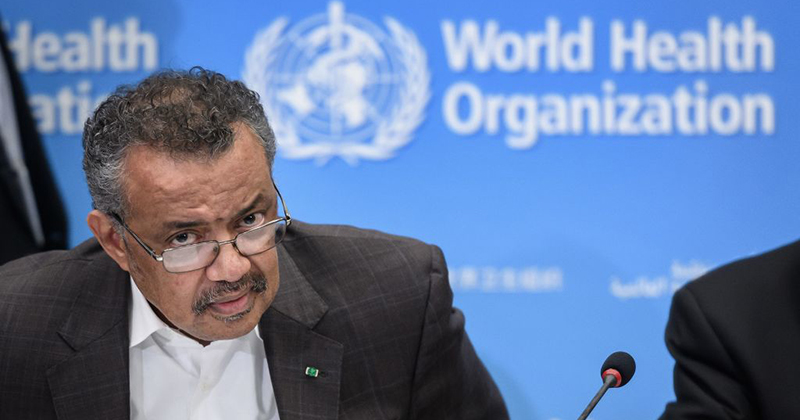 The World Health Organisation asked Thursday that China be shown “gratitude and respect” for its handling of the deadly novel coronavirus, despite the the widespread belief among health experts and government officials that the Communist state has been covering up the true scale of the outbreak to save face.

After meeting with Chinese dictator Xi Jinping, WHO Director-General Tedros Adhanom Ghebreyesus declared that China needs to be applauded for the “extraordinary steps it has taken to prevent the spread of the new coronavirus.”

“China is implementing very serious measures and we cannot ask for more,” Ghebreyesus said, adding “I was very encouraged and impressed by the president’s detailed knowledge of the outbreak and his personal involvement in the outbreak,”

“This was for me a very rare leadership,” Ghebreyesus proclaimed, as the WHO declared the outbreak to be an international health emergency.

Ghebreyesus, a former Ethiopian health minister, also bizarrely praised China’s “transparency,” stating that “China has been completely committed to transparency, both internally and externally, and has agreed to work with other countries that need support.”

The fawning continued as the Director-General urged that “The level of commitment in China is incredible; I will praise China again and again, because its actions actually helped in reducing the spread of the novel coronavirus to other countries … we shall tell the truth and that’s the truth.”

It’s a version of ‘truth’ that not even the Wall Street Journal is on board with, however, given that it has documented how the reality of the situation is being suppressed.

According to the Chinese government, there are now 9,692 confirmed coronavirus cases in China, and the official death toll has risen to 213.

The real death toll appears to be much higher, however, given that those who have succumbed to “severe pneumonia” are not being classed as coronavirus deaths.

In addition, large numbers of victims are still being classified as “suspected cases” despite it being extremely obvious that they have the virus.

The true scale of the situation is not yet known, yet researchers at the University of Hong Kong have estimated that there could be 44,000 victims already.

A model that predicts the number of coronavirus infections that will occur if the outbreak isn’t contained shows that based on current projections, there will be over 183 million infections before the end of February.

Whatever the case, it is quite clear that the Chinese authorities have been anything but transparent, thus it is completely backwards for the World Health Organisation to demand the country’s leaders be afforded any ‘gratitude and respect’. 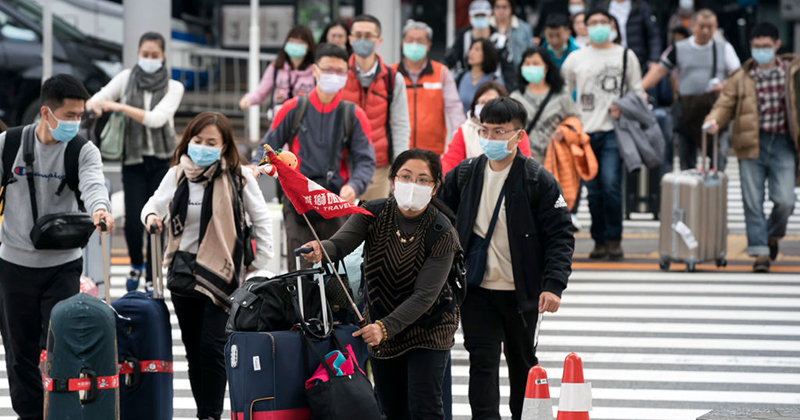 Search engine requests for ‘virus mask’ have exploded as panic begins to set in regarding the deadly coronavirus, which experts have warned could lead to a global pandemic.

The spike is comparable to those registered during other major virus outbreaks:

The searches for “virus mask” are most prevalent in Singapore, China, Macao, Hong Kong, and the Philippines.

Other related searches are exploding:

Statistics also show that in the US, people in Washington, Hawaii, California, the District of Columbia, and Massachusetts are the ones doing the most googling:

Cases of the killer virus have not only been reported in China but also in Singapore, Thailand, Japan, South Korea, and Vietnam.

A suspected case is being investigated in Texas, while The CDC has confirmed a traveler from China has been diagnosed in Seattle.

CNN reports that the man arrived to hospital in an ISOPOD and is being treated largely by a robot, in an effort to avoid any spread of the virus:

The man arrived at the hospital in a special isolated gurney called an ISOPOD and has been treated in a two-bed isolated area, says Dr. George Diaz, chief of the infectious disease division at the Providence Regional Medical Center in Everett, Washington. https://t.co/HznZCw6tEH pic.twitter.com/YDpIxFUHES

There are also several potential cases in the UK, prompting the government to call an emergency meeting.

Several frightening videos purporting to show victims of the virus have emerged, including people dropping dead in the street and a man being wheeled away in a giant quarantine box:

Chinese authorities transporting a person infected with the coronavirus in a box 😂 #ChinaVirus #coronovirus pic.twitter.com/surpfI2sZc

There have been multiple cases of people collapsing on the streets due to the coronavirus outbreak in Wuhan & various parts of China#WuhanCoronavirus #Wuhan#WuhanOutbreak #China pic.twitter.com/4iIwJCGl0M