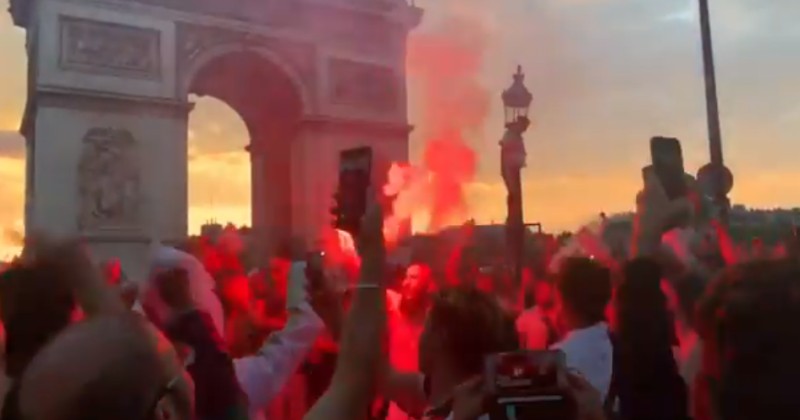 Algerian football fans in Paris, Marseille, Lyon and other cities celebrated their soccer team’s Africa Cup of Nations win by rioting, looting stores and wielding chainsaws in a night of chaos.

Algerians poured out onto the streets following their team’s victory over Ivory Coast last night.

Police were deployed to the center of Paris to keep order as vandals threw fireworks. One video even shows a man wielding a chainsaw.

#diversity is our strength, chainsaws on the #ChampsElysees in #Paris with celebrating Algerian nationals. #Algeria pic.twitter.com/3lCN0oDQO0

Another clip shows aggressive fans, some wearing the colors of Algeria, smashing shop windows and breaking in.

#Breaking: Update – Multiple shops are being looted on the #ChampsElysees in #Paris, after Algerian nationals illegally gathered and stopped traffic. After home country team advanced to quarter finals in the Africa Cup. #Algeria #CAN2019 pic.twitter.com/QMAWpDHuol

The fans shouted “Allahu Akbar!,” “Nique la France” (Fuck France) and “on va baiser des keufs” (We are going to fuck the cops) as they attacked store fronts.

“Tensions started boiling by around 11pm with at least one Molotov cocktail thrown at police lines. Riot forces responded with tear gas and rubber bullets to stop the crowd from vandalizing cars and looting shops,” reports RT.

Similar disturbances were also reported in Marseille, Lyon, Valence and other French cities.

Footage of police deploying teargas in #Paris off #ChampsElysees in aftermath of celebrations following #Algerie win in #CIVALG #africancupofnations pic.twitter.com/4A30QcktEW

As we previously reported, during last year’s World Cup, a woman and her partner were viciously beaten in Paris by a group of Algerian men the sin of shouting “Vive la France!”

French cities were also besieged by anarchists and migrants after the World Cup final, with shops being looted, vehicles set alight and buildings torched.