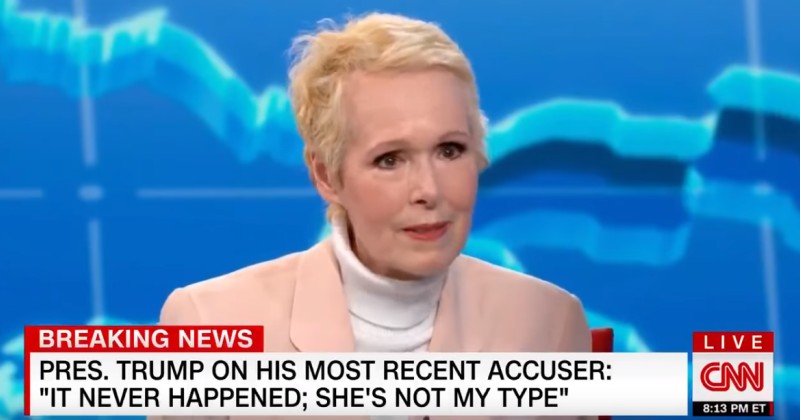 Carroll became the latest woman to accuse Trump of rape, claiming he sexually assaulted her in a dressing room in high-end department store, Bergdorf Goodman back in the 1990’s.

However, during her CNN appearance, Carroll said her experience with Trump “was not sexual” and that she was not “thrown on the ground and ravished”.

Cooper responded, “I think most people think of rape as a violent assault…”

“I think most people think of rape as being sexy,” said Carroll, stunning Cooper, who immediately went to break but not before Carroll had the chance to say, “Think of the fantasies”.

When Cooper asked Carroll to hold over, she fixed him with a glare and said, “You’re fascinating to talk to”.

Cooper laughed, which seemed to prompt a crazed look in Carroll’s eyes.

Meanwhile, in a newly uncovered appearance on Charlie Rose’s show from back in 1995, Carroll explains how “women love” the idea of being dragged into a cave by a man wielding a club.

“When was the last time you took a big old club….” Carroll asked Rose.

It appears that she has had a fixation with rape for the past 25 years.