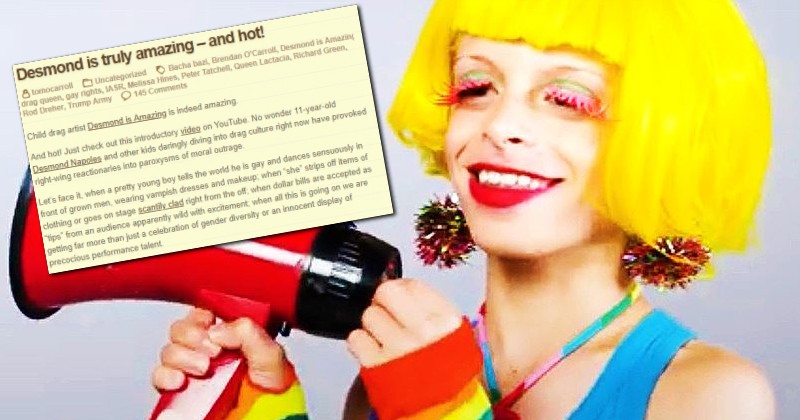 Tom O’Carroll is the former chairman of the now disbanded Paedophile Information Exchange (PIE), a group that once campaigned for the age of consent to be lowered to 4 years old.

He was also a prominent member of the International Paedophile and Child Emancipation.

In December 2006, O’Carroll was jailed for 2 and a half years for conspiring to distribute a cache of child pornography obtained from his co-defendant which contained 50,000 indecent images.

O’Carroll has repeatedly campaigned for the normalization of sexual relations with children and sees nothing wrong with pedophilia.

In a blog post published to WordPress last month, O’Carroll wrote about his admiration for ‘Desmond is Amazing’ – a 12-year-old “drag queen kid” who has repeatedly been given a sympathetic platform by the mainstream media.

He goes on to argue that a “scantily clad” Desmond accepting “tips from an audience apparently wild with excitement” is “far more than just a celebration of gender diversity or an innocent display of precocious performance talent.”

“It says, loud and proud, “I am a sexy kid, with sexy feelings. It’s totally cool for grown-ups to get turned on by me. I love it. That’s why I do this stuff. It’s great. It’s fun. It’s me!” writes O’Carroll.

As we reported earlier this month, reacting to concerns over Desmond’s performance at a gay night club in New York where attendees threw money at the child, his mother defended the decision, telling an Australian TV show, “I don’t understand what the controversy is.”

Desmond was previously involved in ‘Drag Queen Storytime’ – in which drag queens visit schools and libraries across America to read to children.

One of the participants at a Drag Queen Story Time event in Houston, 32-year-old Albert Garza, later turned out to be a registered sex offender who was convicted of assaulting an eight-year-old boy in 2008.