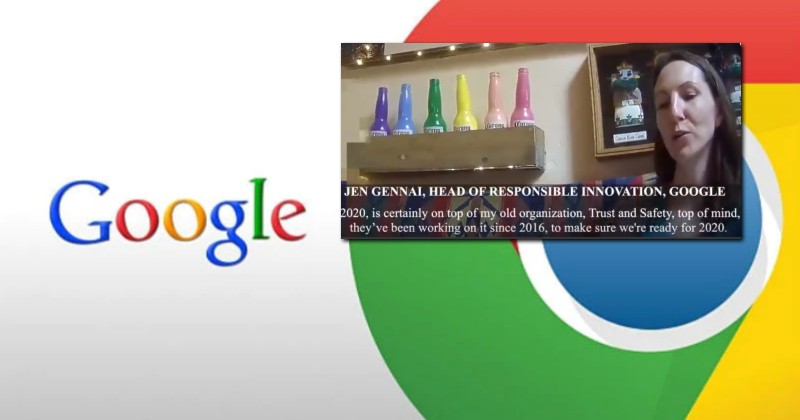 A Google executive has been caught on camera admitting that the search giant is manipulating its algorithm to prevent Trump winning re-election in 2020.

Jen Gennai, head of responsible innovation at Google, was filmed by Project Veritas admitting that Google is using AI and algorithmic manipulation to meddle in the next presidential election.

She speaks of “putting that line in the sand” to ensure “fairness,” before acknowledging there are, “People who voted for the current president who do not agree with our definition of fairness.”

Speaking about the 2020 presidential election, Gennai said “they’ve been working on it since 2016 to make sure we’re ready for 2020,” with the implication clearly being to prevent Trump from winning re-election.

Gennai even dismissed the power of Congress to keep Google in check, bragging, “We got called in front of Congress multiple times….like they can pressure us but we’re not changing.”

Gennai then challenges any attempt to break up Google by explaining, “It will make it worse, because all these smaller companies who don’t have the same resources that we do will be charged with preventing the next Trump situation, it’s like a small company cannot do that.”

GOOGLE INSIDER: "They’re not an objective source of information. They are a highly biased political machine that is bent on never letting somebody like @RealDonaldTrump come to power again." #GoogleExposed pic.twitter.com/tSTfoCFwE1

“There’s this facade about what they’re doing, but what they’re actually doing, what the employees are actually seeing inside the company is different,” a separate anonymous whistleblower told Project Veritas.

According to the whistleblower, Google is a “highly biased political machine that is bent on never letting someone like Donald Trump come to power again.”

According to Robert Epstein, Google algorithmic manipulation can shift millions of votes in national elections.

Google is clearly engaging in massive election meddling and should be investigated by lawmakers immediately.