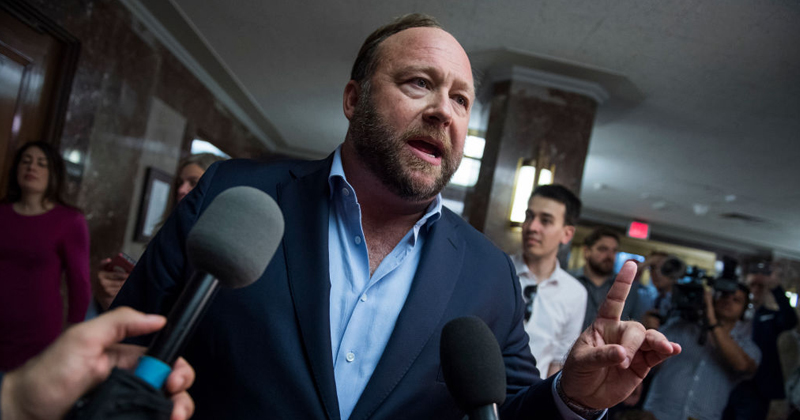 – The emails were sent to Infowars by a third party
– The FBI’s investigation is treating Jones as the victim
– The mass media ran a giant hoax claiming Jones sent the emails to Sandy Hook lawyers
– The emails ended up in a spam folder and were never opened by Infowars staff
– The emails sent to Infowars were “very hostile” and contained threats against Jones
– Plaintiff’s lawyers in the Sandy Hook case tried to subpoena 9.6 million emails
– Unopened emails did not say they contained child porn
– The entire farce was likely a set-up to frame Jones
– Jones has offered a $1 million dollar reward to find the perpetrator

The entire farce clearly looks like a set-up intended to frame Jones. Here’s what actually happened;

As part of discovery, the judge in the Sandy Hook case initially ordered Infowars to turn over an archive of 9.6 million emails received since 2012.

Having subsequently accepted that this was an impossible task, the judge clarified that Infowars only had to turn over emails that mentioned Sandy Hook terms or the names of victims.

When Sandy Hook lawyers found these emails as part of discovery, they turned them over to the FBI in late May and the FBI began an investigation.

According to Jones’ attorney Norman Pattis, the FBI is treating Jones as the victim because the malicious emails were sent to him by a third party and were “very hostile” towards Jones.

“There were 9.6 million emails that were searched; we turned over about 57,000 of them. In 12 of them, there were embedded images of child pornography,” Pattis said. “As it turns out, those emails were never opened, the images were never opened. There’s no evidence that anybody here, or anybody affiliated with you, or you, ever searched them. So clearly they were placed in there as malware.”

“I’ve spoken to federal prosecutors, they regard you as a victim. They do not regard you in any way as a suspect,” he added.

“I spoke to federal prosecutors last week. They report that there is no indication anyone at InfoWars knowingly possessed child pornography,” said Pattis. 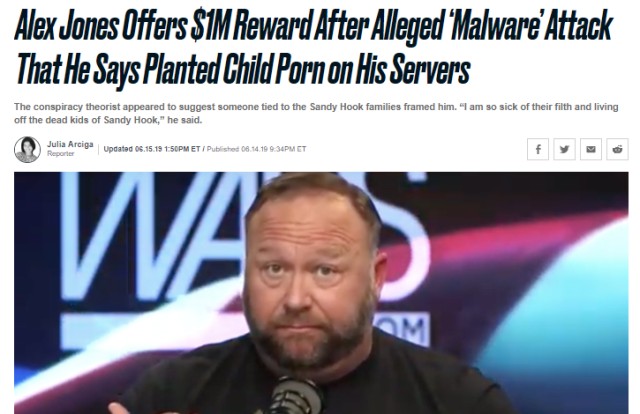 Despite the media acknowledging in early reports that Jones was the victim, reporting that he had offered a $1 million reward to find the culprit who sent the emails, two days later the press began running fake news headlines claiming Jones had sent the emails to Sandy Hook lawyers, which is completely false.

One newspaper, the Hartford Courant, actually reported the truth when it stated, “The FBI has informed Alex Jones someone planted child pornography on the servers for his Infowars website” and that the emails “appeared to be threats against Jones but actually contained child pornography.”

Another lawyer acting on behalf of Jones, Robert Barnes, also commented on the matter.

“FBI confirmed Jones was VICTIM of malware sent to him he never opened, that lawyers found from court discovery opening up all attachments of all emails ever sent to him,” said Barnes, adding, “I’m wide awake in Vegas & will be suing libelers.”

FBI confirmed Jones was VICTIM of malware sent to him he never opened, that lawyers found from court discovery opening up all attachments of all emails ever sent to him. FYI: it's early morning in UK, where @PrisonPlanet is. But I'm wide awake in Vegas & will be suing libelers.

“When even the Jones-haters detail how #AlexJones was the VICTIM of malware, then you know how bad the libel is from the rest of the press. Shouldn’t that cause people to ask: what else are they lying about concerning #AlexJones?” he added, highlighting a tweet by trial lawyer Max Kennerly.

When even the Jones-haters detail how #AlexJones was the VICTIM of malware, then you know how bad the libel is from the rest of the press. Shouldn't that cause people to ask: what else are they lying about concerning #AlexJones? https://t.co/kRkdIa4Mhb

“It does not appear (Jones) was knowingly involved in possessing child pornography. Rather, someone emailed it unsolicited to an InfoWars address,” said Kennerly.

Alex Jones is horrible and I hope he gets sanctioned and loses the case.

But it does not appear he was knowingly involved in possessing child pornography. Rather, someone emailed it unsolicited to an InfoWars address.